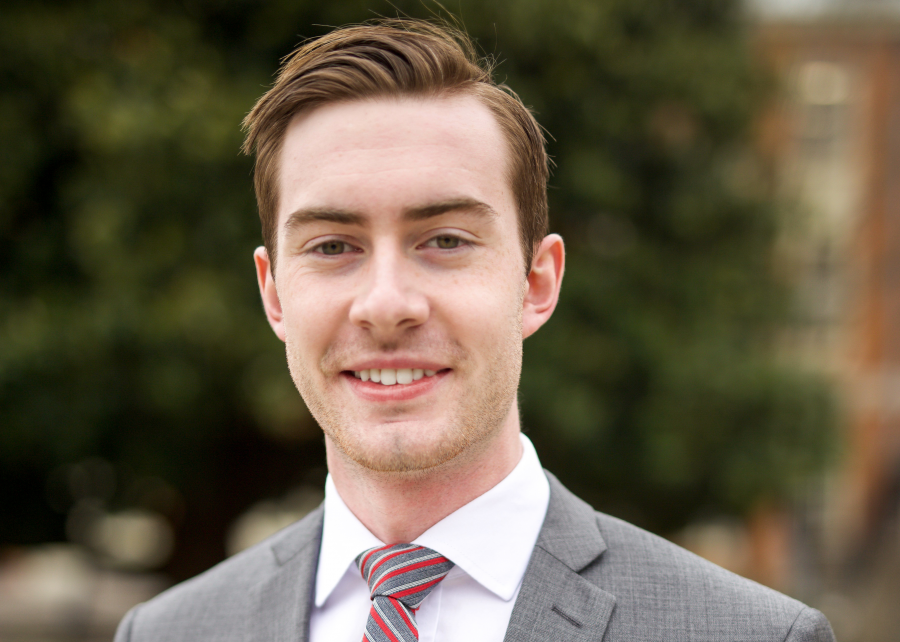 Will McKay, a double major in German and Business & Enterprise Management, has approached language acquisition in a unique way. Originally from Stamford, Conn., McKay first took German in high school.

“I took German in high school because I wanted to try something new and different. It doesn’t hurt that German is practical for a job due to Germany’s large economy. If I wanted to move and work abroad, it might be nice to know German,” McKay said.

“When I visited Wake Forest, I talked to the German department, and they were very honest and welcoming with me. After four years, I’ve learned those initial impressions were correct. All of the professors are extremely helpful and helped me transition from a beginner level to near fluency. It’s a fun department to be a part of,” McKay said.

McKay’s favorite class at Wake Forest was his Business German class. Finding the class applicable to both his majors, McKay credits the class with helping him land an internship in Germany. He interned at Elvation Medical GmbH, a small medical device firm in Kieselbronn that markets, sells and services medical devices in southwest Germany.

“The class did a great job of teaching you how to navigate the business world in German. It taught you a lot of technical German terms that you wouldn’t get in a typical German class. We learned how to make German resumes and discussed similarities and differences between the Germany and U.S. job markets,” said McKay.

As a double major, McKay is appreciative of the flexibility within the German department and the availability of their classes.

“I honestly think the German department makes it very easy to double-major. It’s not hard to get into the classes you need to so it can be done at your own pace. At the end you will come out speaking near-fluent or fluent German,” McKay said.

McKay’s strong work ethic certainly contributed to his success. Professor Rebecca Thomas tells a story of McKay going above and beyond, something she feels is emblematic of the student he is.

“My favorite Will story is from last semester. He had too many credit hours to be able to sign up for my advanced German literature course for credit, but he ended up attending class anyway, and he read almost all of the assigned works in German.” Thomas said. “He was all in even as an auditor. He also has a fantastic sense of humor and helps keep everyone light even as he is taking his studies extremely seriously. He is an absolute delight to have in class.”

Professor Grant McAllister agrees with Thomas that McKay was always exceeding in the classroom.

“Obviously he is intelligent and successful, but there is so much more about him that makes him such an outstanding member of our department. He is affable, genuine, kind, compassionate and humble despite his multiple talents. He has been a huge presence in our program, and we will all miss him,” McAllister said.

Along with his internship in Kieselbronn, McKay found other ways to practice and utilize the strong German foundation laid by his classes. He attributes his semester abroad at the Flow House in Vienna as one of his favorite Wake Forest memories.

“The group of people I met there are still some of my best friends. It was a wonderful semester. Everywhere I went I would practice my German, but it took a bit of an adjustment due to their accents,” McKay said.

While he’s happy that four years of hard work will culminate in his graduation, the moment is bittersweet for him.

“It’s definitely a little sad. A lot was supposed to happen in the second half of the semester. I wasn’t able to get to say my final goodbyes to not only my friends and my peers, but also to the professors who have been so instrumental in the person I’ve become,” McKay said.

Next year, McKay plans to teach English in Germany on a Fulbright Scholarship.