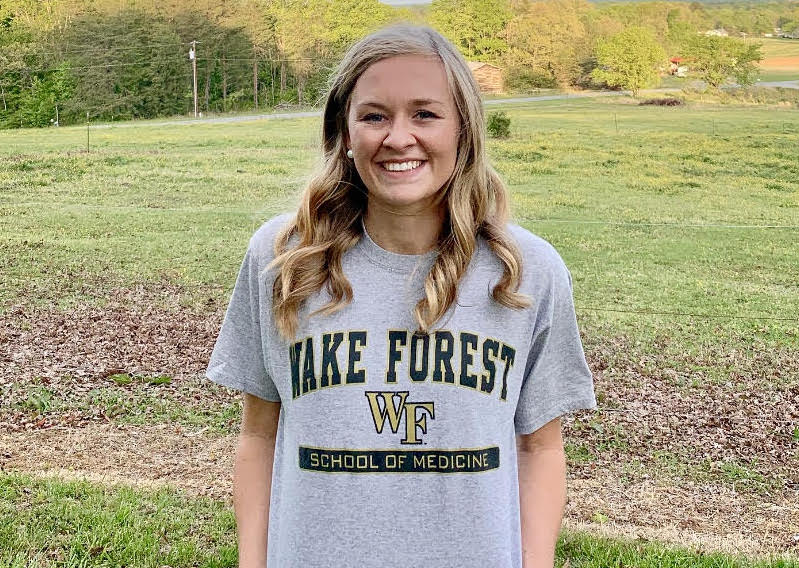 Headlining the Health and Exercise Science (HES) major is native North-Carolinian Nicole Rogers. Rogers hails from the town of Walnut Cove, a mere stone’s throw from the campus she’d eventually elect to call home during her college years. When the time came to decide which university she’d attend after high school; Rogers was faced with a difficult choice.

She’d been offered full scholarships from both Wake Forest and the University of North Carolina at Chapel Hill, spectacular accomplishments in their own right. In the end, however, it was the unique sense of intimacy present in Wake Forest academics that eventually won her over.

“It was a very personal experience right from the beginning,” she said. “The professors know me for more than just my grades.

Ever since she arrived on campus, Rogers hasn’t wasted a moment of her time as a Demon Deacon. She’s remained active in both academic and extracurricular capacities, striving for excellence in the classroom while pursuing her passions outside it.

In fact, she’s experiencing the best of both worlds in this regard; Rogers frequently participated in rodeos during her time at Wake Forest and used this experience as inspiration to fuel an impressive long-term research project involving the ramifications of concussions sustained in a rodeo setting. She went on to present her findings several times over the course of her time at Wake Forest, just one of a long string of academic accolades.

Rogers also proved herself to be a thoughtful and devoted public servant during her four years as an undergraduate, putting her unique skillset to work in a number of settings. She’s dedicated her time and effort toward volunteering with cancer patients in a local hospital, gathering valuable medical experience in the process. Rogers’ affiliation with the rodeo has proven beneficial in this area as well, as she’s also done volunteer work at a facility that specializes in horse riding therapy for children facing mental disabilities.

Rogers began her path toward the HES major with clear, precise goals in mind. She wanted to focus on the study and improvement of the human body, and has allowed those motivations to shape her future. As she progressed through the major, she told me, she grew incredibly fond of the faculty in the HES department.

As it turns out, the feeling was mutual. Rogers’ presence was widely appreciated by each of her professors. As both a student and a person, the impact she had on those around her was entirely positive.

“She is an extremely upbeat person,” said her advisor, professor Gary Miller. “It would be difficult to find someone who has a negative word to say about her.”

As Rogers’ time as an undergraduate student draws to a close, she has her gaze trained firmly on the future. She’s been accepted to Wake Forest’s medical school, where she has a tentative plan to pursue a career in surgery.

While she’s grateful for the opportunity to prolong her time as a Demon Deacon, she’s also saddened by the fact her time as an undergraduate student came to such an unceremonious end. She misses the little things the most, such as the scenic walks across campus or sharing a meal with friends in the dining hall. Her favorite experience as a Wake Forest undergrad, however, came when she was a freshman, during the Belk Bowl in which the Deacs faced off against Texas A&M.

“All of my friends went down … we were in the front row of Bank of America Stadium,” she recalled. “it was a very high scoring, back and forth game the whole time. It was really cool.”

Rogers remembers the past four years fondly, and as a period filled with memorable experiences. It’s clear from what she recounted to me that she made her presence felt wherever she set foot on campus, and that her future is undeniably bright.