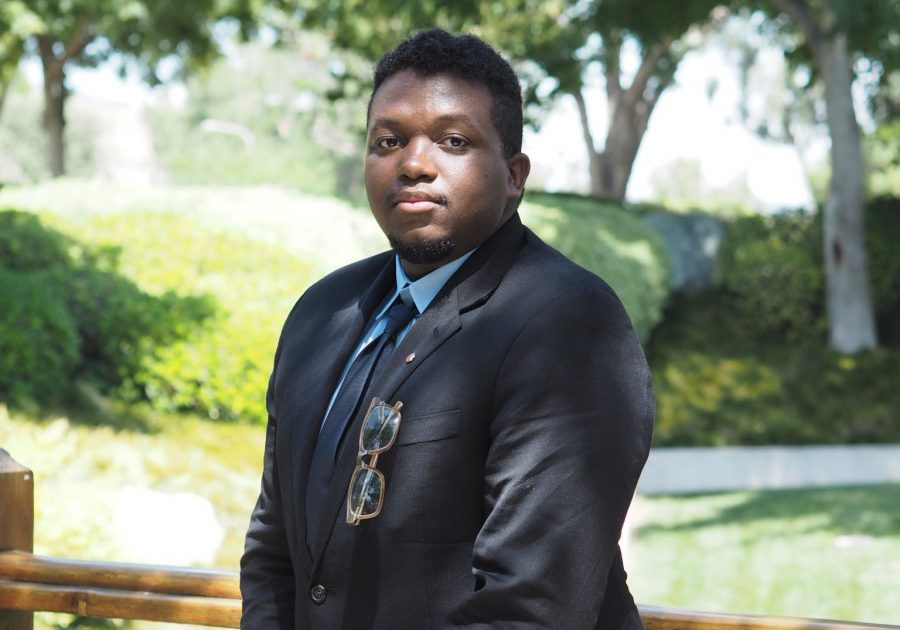 Omar Benjamin is a Japanese Language and Culture major from Atlanta, Ga. Having enjoyed his experience in major courses, interactions with his professors and the bonds he’s made after finding his place in various student groups and organizations, he looks back fondly on his experience as graduation grows near.

Among personal growth and gaining independence, he noted a number of significant accomplishments and enjoyable experiences. One of his favorite experiences was being a representative of Wake Forest and the U.S. when he served as a delegate at the Japanese American Student Conference, traveling to four different Japanese cities, learning about the culture, meeting government officials and the princes of Japan, and discussing the interaction of young adults in Japan and the United States.

“Omar has been the most engaging student. I know he is always busy, but in spite of his business, he never hesitates to reach out and make a difference through his engagement with various campus groups. He is passionate and committed to the Japanese studies, always making his best efforts to excel,” said Japanese professor Yasuko Rallings. “I think I’ve been sort of like his ‘school mom,’ and I’ve had the pleasure of seeing him grow over the college years. I’ll certainly miss seeing him on campus, but I’ll also know we’ll stay in touch.”

Outside of his major, Benjamin served as a student assistant in the LGBTQ Center, a manager of the volleyball team, a member of Circle K International, a member of Japanese studies club and a team member helping the Student Union manage and produce the drag shows. He looks back on the drag shows as one of his favorite memories at Wake Forest.

“I’m really glad I was able to bring something that I found so much enjoyment in to other students on campus, and celebrate queer culture with an event run by queer students,” Benjamin said. “I loved every second of it.”

Some of Benjamin’s favorite classes have been those on Japanese Language, always being a part of his week he looked forward to. He’s also enjoyed a recent course on women’s gender and sexuality in modern Japan, noting that the discussion and teachings of Professor Mari Ishida were a great experience. To students planning to follow the same major, he offers some advice on passion and persistence.

“Throw your heart into it. Japanese can be a hard language to learn, but if you put the time into it, and truly develop a passion for wanting to speak and understand it, then you can go far,” Benjamin said.

Benjamin feels that his Japanese studies have gone beyond just being a class or a major. “Sometimes this doesn’t feel like a major, it feels like it’s a part of my life.” He says that his experience in the Japanese major has been fun and humbling.

Benjamin has learned a lot not only from his experiences in his major and extracurricular activities, but also in finding acceptance and a sense of belonging. He leaves incoming first-years with advice on making the most of their experience at Wake Forest. “Find a way to make Wake Forest a part of you.”

In his first two years Benjamin struggled to find acceptance and enjoyment in his experience at Wake Forest, but eventually created a family with the groups he became a part of, like the LGBTQ center, the volleyball team, and other student groups. “It doesn’t have to feel scary and like you’re all on your own.” Having found people to share experiences with and depend on, Benjamin hopes that new students will find a family as he did.

As Benjamin prepares to move beyond graduation and continue to utilize his Japanese language skills as a Japanese annotator for Here Maps, he closes his final year recognizing the unfortunate circumstances he finds himself, other seniors, and all individuals on campus dealing with.

Benjamin is sad to say goodbye without celebrating his experience and accomplishments, but is happy to sacrifice that in order to ensure the safety of other individuals on campus.

“I’m totally fine with putting aside my graduation and the celebration to ensure that other people are safe.” Despite the separation, he notes that his school spirit is at an all-time high.