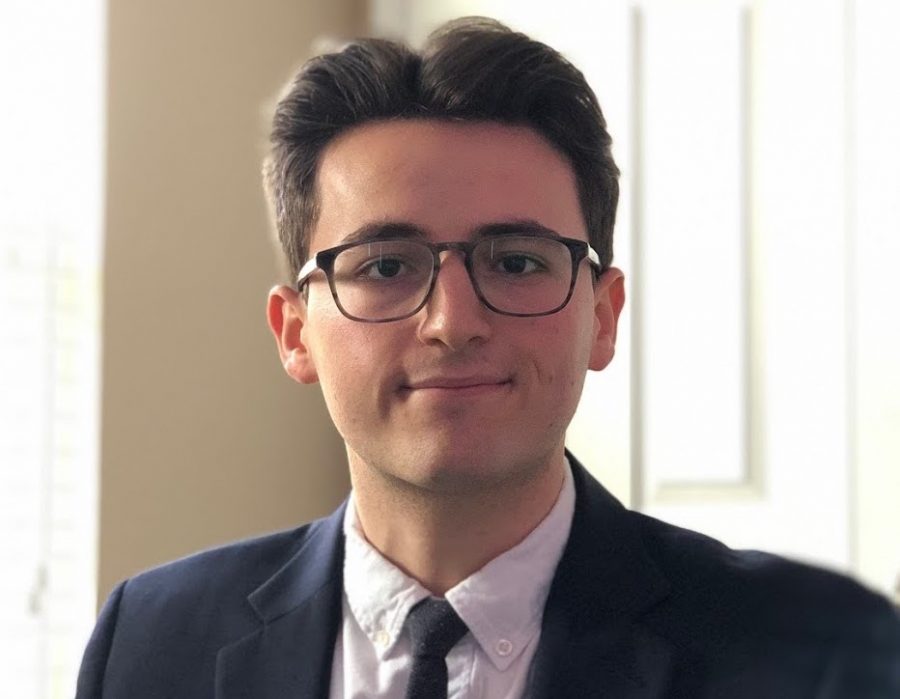 Laurence Roberts’ academic journey at Wake Forest has blossomed over his four years as a Demon Deacon.

Roberts is a philosophy major and is double minoring in interdisicplinary writing and German studies. When he first toured Wake Forest in August of 2015, however, he had a different plan in mind for his future self. After he was accepted Early Decision over Thanksgiving Break of his senior year of high school, he began to assume that he would study biology.

He eventually changed his mind, and was confident he would study Political Science instead.

Everything changed for Roberts when he was registering for classes the summer before his freshman year. He got a call from the registrar, informing him that a class he had signed up for was full. He then opted to register for Philosophy 111, Basic Problems of Philosophy with Professor Christian Miller.

“I knew nothing about it. I honestly don’t think I knew a philosopher besides Aristotle or Plato at the time. I went in completely new to the idea, but I think that is a really important part of why I wanted to pursue it over time,” Roberts said. “This class was a really great survey of what philosophy talks about and problems that we deal with. It was incredibly rigiorus, which was very important for me to have at the beginning.”

The Braswell Philosophy Society, an organization on campus, was brought to Roberts’ attention by Miller his freshman year. Roberts and his good friend, Graham Hardig, attended a meeting on a whim and with very little knowledge about the topic. At the end of the year, Miller reached out to Hardig and Roberts, inquiring if the two would be willing to lead the organization the following year. They happily agreed.

“We had no expectations whatsoever. All we knew is that we had a professor we really liked, a class we loved, and something we had both began to be interested in,” Roberts said. “The Braswell Philosophy Society was an opportunity presented to Graham and I, and we both saw the potential that it could have and decided that we would be able to do something with it.”

From that point on, the Braswell Philosophy Society has grown into something Roberts is very proud of. The organization meets weekly with about 25 consistent members who attend, ready to converse on a different topic each meeting. For Roberts, he cherishes this organization for the way it has doubled as an academic and social asset during his time at Wake Forest.

“The Braswell Philosophy Society, for me, is a perfect overlap between academics and socializing, in a way that I haven’t found much of at Wake [Forest],” Roberts said.

“I have had Laurence in several of my classes, and he has always been a joy to teach. But I also think incredibly highly of Laurence for his role in reshaping the philosophy club,” Miller said. “I am so grateful for all the time and effort he has devoted to enriching discussions on our campus about the deepest questions of life!”

Roberts would like to thank Miller, Ms. Donna Simmons, and the whole Philosophy Department for supporting his journey at Wake Forest and the Braswell Philosophy Society.

Another vital aspect of Roberts’ Wake Forest experience is the Writing Center. Roberts has been a tutor in the Writing Center since January 2019, and he feels it has given him a very meaningful experience that lives much deeper than just conferencing his peer’s papers. He appreciates the way he is able to see assignments and prompts from classes he has never been exposed to.

“It’s very humbling,” Roberts said. “As a senior, it’s easy to think that you’ve mastered your discipline, but the Writing Center has really exposed me to how much else is out there. It’s allowed me to acknowledge the scope of the university.”

Not only that, but Roberts feels that being a tutor in the Writing Center has given him a wonderful opportunity to connect with students he otherwise would not have.

“As a senior, I’m given the chance to talk to a freshman or sophomore who’s studying something way different than I am, who I literally would have never come into contact with. Now, I am sitting down with them for an hour and I get to see how they’re feeling and get to see the way they write,” Roberts said.

Roberts is an avid Pit fan — If you know him, you know he likes a good Pit Sit. Roberts also appreciates the way he has lived on campus all four years, and the consistency it has given him. He expects to miss Z. Smith Reynolds Library (ZSR) the most; a place he was once intimidated to enter that had turned into one of his most visited locations that he wishes he had explored more.

Upon reflection of his time at Wake Forest, Roberts is satisfied that he has been able to grow comfortable with the uncomfortable aspects of college life. Advice he has for anyone coming to Wake Forest, or who is currently attending, is to embrace this inevitable feeling of discomfort and to allow yourself to feel pushed and challenged by it.

“I came to Wake [Forest] with this whole idea of ‘whatever new experiences come my way I’ll take.’ I didn’t want my experience to be dictated about what I said I was about in high school, because that’s not really exciting when you have a fresh start,” said Roberts.

Roberts has accepted a full time offer in the Educational Therapy department at Freudigman & Billings in Westport, Connecticut.