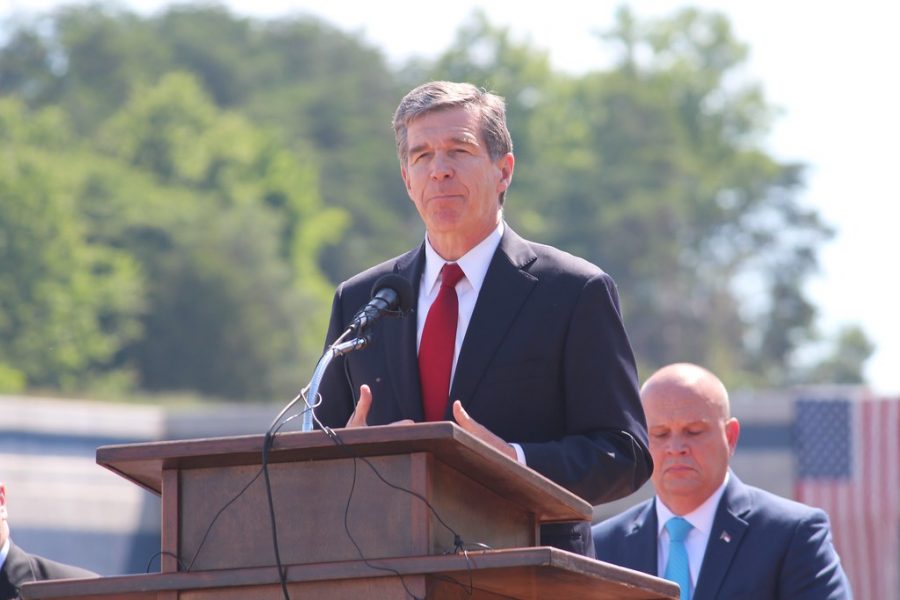 As states throughout the Southeast U.S. rush to reopen amid the coronavirus pandemic, North Carolina Governor Roy Cooper announced Wednesday that the state would extend its “Safer at Home” Phase 2 coronavirus restrictions until July 17.

“Since the beginning of this pandemic, I’ve been clear that data and science would lead the way” said Cooper in a press briefing. “In keeping with that standard, it’s clear that our numbers will keep us from moving into the next phase of easing restrictions.”

In addition to the extension of Phase 2 restrictions, Cooper announced a state-wide executive order requiring the use of masks in public spaces.

Cooper’s obdurate commitment to maintaining public health measures across the state comes amid reports of renewed spikes in coronavirus cases throughout the southeast. North Carolina, Arkansas and Louisiana are the only states in the region that have paused their reopening progressions, while states such as Georgia, South Carolina, Tennessee and Louisiana continue to reopen despite warnings from public health experts.

“If you leapfrog over different phases, you increase the risk that you’re going to have the kind of resurgences that we’re seeing in certain of the states” said National Institute of Allergy and Infectious Diseases director Anthony Fauci in a June 13 press briefing.

Despite the Phase 2 extension in North Carolina, restaurants, stores, salons, religious facilities and pools are allowed to operate. Many businesses in the Winston-Salem area, however, have remained closed. Twin City Hive, a popular downtown coffee shop, announced the permanent closure of its Brookstown Ave. location in April despite relaxations in public health ordinances that would allow it to reopen. The coffee shop is currently working to open a new location in Gibsonville, N.C.

Forsyth County has recorded 33 coronavirus deaths and 2,788 confirmed cases overall. According to the New York Times, the county’s new-case reportage has remained “about the same” throughout the past two weeks. The virus has disproportionately impacted Forsyth County’s LatinX population, according to the Winston-Salem Journal, with available data showing 65% of the county’s confirmed cases are among LatinX community members.

Winston-Salem City Council Member Annette Scippio, a representative of the East Ward, tested positive for the virus last week, leading the City Council to hold its meetings online. According to the city’s official statement, “all city staff and council members who had close contact with Scippio were tested for the virus. Any positive results are being sent to the Forsyth County Department of Public Health for contact tracing.”

Access to testing is gradually expanding throughout Forsyth County. New “pop-up” testing sights have emerged throughout the East Winston neighborhood in the past week, where CVS and Novant Health, a network of hospitals and clinics headquartered in North Carolina, have worked cooperatively to increase community access to screening.

Ahead of a “Test Them All” protest scheduled by the Winston-Salem Black Lives Matter chapter for Saturday, June 27 at Winston Square Park, Forsyth County Director of Public Health Joshua Swift stated on Thursday that all inmates in the Forsyth County Jail will be tested for the coronavirus in the coming days. Five Forsyth County detention officers have already tested positive.

Protests throughout the city and across the country have drawn people into close contact, where the risk of viral transmission is greatest. Dr. Christopher Ohl, an infectious disease expert at Wake Forest Baptist Medical Center, warned against attending protests but advised that those who attend should wear masks, maintain social distance and seek coronavirus testing afterwards.