Things are heating up in the NBA bubble 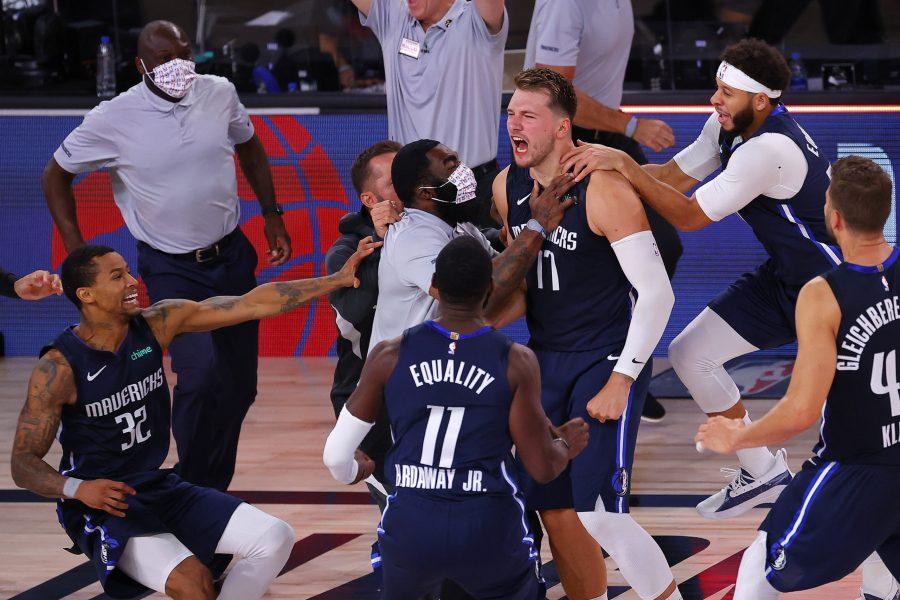 Luka Doncic (77) of the Dallas Mavericks celebrates a game-winning three-point basket with teammates against the Los Angeles Clippers during overtime in game four of the Western Conference First Round on Sunday, August 23, 2020 at AdventHealth Arena at ESPN Wide World Of Sports Complex in Lake Buena Vista, Florida. (Kevin C. Cox/Getty Images/TNS)

Time Running Out for Embiid, 76ers

Just 24 hours after being swept by the Boston Celtics, the 76ers relieved head coach Brett Brown of his duties. This marks the end of a frustrating season for a team that many predicted would be representing the Eastern Conference in the Finals this year. Injuries, inconsistent effort from young superstars Joel Embiid and Ben Simmons and an inability to install a successful half-court offense saw an immensely talented 76ers team woefully underperform on their way to a first-round playoff exit. GM Elton Brand certainly has his work cut out for him this summer, with moving Al Horford’s contract at the top of the list.

Let me be clear, what Luka Doncic has done in his first career postseason is incredible, spectacular, inspiring, unbelievable and all of the above. Most people saw the Clippers-Mavs first round playoff series as a mere formality, believing the Mavs would be tossed aside in four or five games by Kawhi Leonard, Paul George and co. and that young, Luka Doncic would have to learn from experience how difficult winning in the postseason is. However, Luka didn’t want to hear any of it. Through the first four games of the series, the Mavericks find themselves tied with the Clippers at two games apiece. Luka is averaging a 31-point triple double; he just dropped 43 points, 17 rebounds and 13 assists on 18-31 shooting, including the game winning step back three. Oh, and he did all of that on a sprained ankle. Luka has made it abundantly clear that his time is now, he’s here to stay, and he doesn’t care about the Lakers-Clippers WCF matchup that we’ve been dreaming of all season long.

The first round of the Eastern Conference Playoffs is over and of the four teams who advanced, the only team to have lost a game so far is the number one seed, the Milwaukee Bucks. Before last season, LeBron James held a stranglehold over the Eastern conference, making it to the finals, eight years in a row and now with Kawhi Leonard also in the Western Conference, the Eastern conference is finally wide open, with the four remaining teams all having a fairly decent chance to make the finals in my opinion. Below I’ve included my own analysis of two of the contenders in the Eastern Conference. I’ll be doing more teams from both conferences as the postseason goes on.

Led by Nick Nurse and one of the deepest benches in the NBA, the Toronto Raptors actually managed to have a better record this year than they did last year with Kawhi Leonard on the roster. They combine San Antonio Spurs style ball movement with three-point threats at all five positions and a hard-nosed defense, making them very difficult to match up with. Ultimately, I don’t think I’d bet against Nick Nurse in a seven game series.

They have Giannis Antetokounmpo, the reigning two-time MVP, the most dominant force we’ve seen on an NBA court since Shaquille O’Neal and a historically great defense. Who’s picking against them? Well, not so fast. In last year’s playoffs, down the stretch of a close game the ball would be in Kris Middleton’s hands instead of the MVP’s, partly due to Giannis’ lack of a jump shot. This season, we’ve seen minimal improvement from Giannis when it comes to his off-the-dribble jump shooting and I think that in a close game that could really hurt them. Giannis’s immense value is in what he does over the course of a 48 minute game, however in the last minute of a game, there are about 10 guys in the NBA I would want with the ball in their hands instead of him.