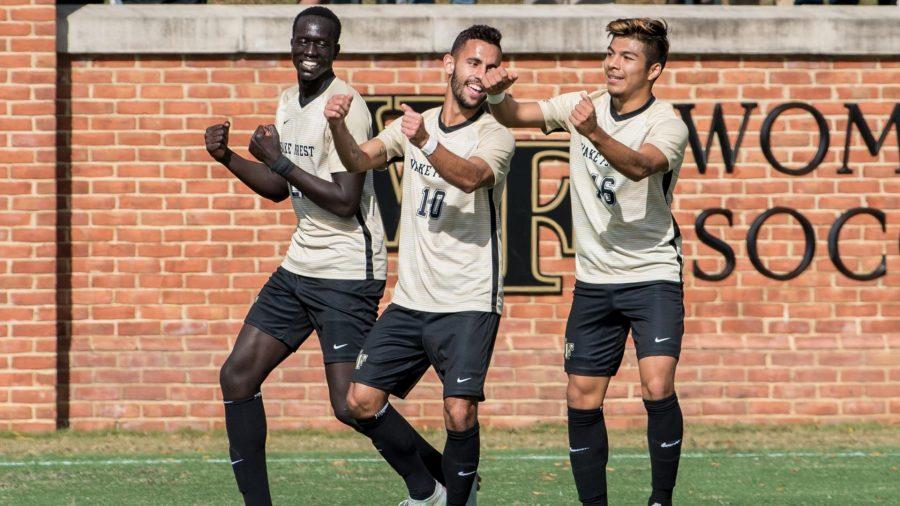 It was the last game of the regular season when Aristotle Zarris’ life changed in an instant. Minutes earlier, Zarris was wheeling away from the Louisville net, celebrating his goal that put the Deacs up by two and effectively sealed the win against the ACC rival. The celebration turned into devastation when Zarris fell to the turf clutching his knee with an injury that was later revealed to be an ACL tear.

Two surgeries, eight-months, and one pandemic later, Zarris is calmly reflective of the ongoing process towards recovery that pushed him in ways he never expected.

Zarris had just gotten his brace off in time for spring break when the world, and his lengthy rehabilitation process, came face-to-face with the pandemic. At that moment, Zarris was faced with a difficult choice that would have serious implications for his future as a soccer player.

“I was given the option to stay on campus and do rehab,” Zarris recalls. “I told the coach, I didn’t want to be stuck on campus all by myself and do rehab … it’d be too difficult and depressing.”

Balancing the mental and physical fatigue associated with a long recovery from a serious injury is a predicament that no athlete wants to find themselves in, so Zarris made the decision that was best for him. That decision meant a return to Sarasota, Fla. and his family, but also a departure from the five-days-a-week specialized care he had been receiving from the trainers at Wake Forest.

Back in high school, Zarris had torn his other ACL, so when he returned home he called the clinic where he had rehabbed several years ago but was told that they weren’t in a position to take in any new clients. For the next two weeks, Zarris received no physical therapy, so he made up his own regiment of home exercises. Although he knew that this work was not allowing him to achieve the same progress he had been making with trainers at Wake Forest, it was better than nothing. When his father suggested that he reach out to the clinic again, Zarris was informed that since he had been in Florida for two weeks he could come to the facility.

“It was like a ghost town,” Zarris remembers. The previously bustling clinic was nearly empty when he returned. The mandatory mask usage policies and a total lack of hands on care made this rehab experience starkly different from his first. Zarris also noted that the intensity of the therapy paled in comparison to the arduous but productive care he had received back at Wake Forest. “I remember getting there and thinking — not that it was easy because rehab is never easy — but that I wasn’t being pushed the same way the trainers at Wake push.” So, when the phone call came from his coach inviting him back to campus in early June as one of several athletes recovering from injuries, the decision was easy.

Working closely with trainer Niles Fleet, Zarris returned to a drastically different rehab experience than that which he had left three months ago. Where he once could scan in at will, Zarris found himself waiting for a staff-member to open a door. Once he began running again, Zarris pushed through the discomfort under a hot mask in the brutal North Carolina summer; over time, his work paid off as he gradually grew stronger and stronger. Zarris is confident he made the right choice about returning to campus, “I wasn’t too worried … I was happy just to be back.”

Zarris lived alone before being joined by teammate and fellow ACL recoveree, Justin McMaster, so he passed the time between rehab sessions by taking courses during both Summer Sessions. He also spent some time in the kitchen, “I’ve kind of learned to cook, I’m not too bad, my mom taught me some things.”

As the weeks passed, Zarris could feel the progress, as strength returned to his leg and he began to steadily return to the form that has made him one of Wake Forest’s most dangerous attackers.

While more athletes have trickled back to campus in spaced out waves and under similarly stringent coronavirus-related restrictions, the season itself remained in jeopardy. “From a team perspective, it’s frustrating since there’s so much uncertainty,” he says.

But even when Olympic sports were pushed back many seasons, which gave Zarris more time to recover, his focus did not waver from his top priority: the success of the team.

Zarris remains dedicated to returning to the pitch whenever he can; and, his resilience to recover from such a difficult injury in the midst of a global pandemic stands as a testament to his resolve.

Today, he looks to the future with cautious optimism. He’s urging fellow students to follow the new sets of rules so that the Wake Forest community can return to a sense of normalcy, and hopefully the soccer team can soon return to business as usual at Spry.