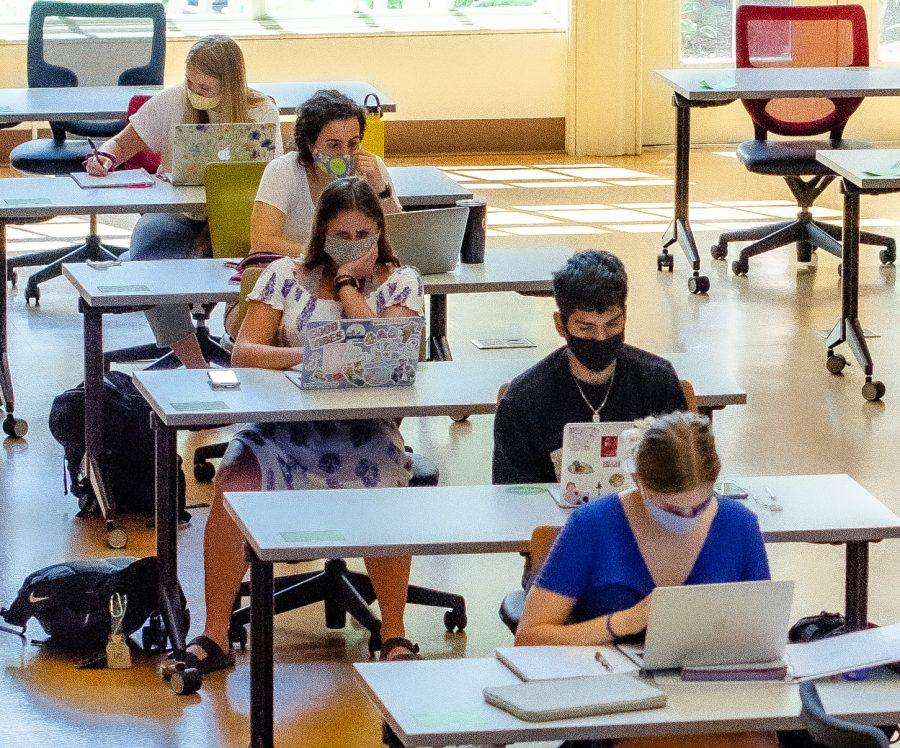 It’s 3:15 p.m. on the first day of classes, affectionately known as FDOC. On a typical FDOC in the fall, students rush out of the doors of Greene and Tribble halls, flooding the quad and Benson courtyard after their 2:00 p.m. classes. They hug their friends and reunite with their classmates after the summer hiatus. They wave hello to their professors, join impromptu frisbee games, or lie on picnic blankets, relaxing after a busy and scorching hot August day in Winston-Salem. Sometimes, they even bump into and strike up a conversation with someone they don’t know.

This is not what campus looked like on Wednesday. Instead, 3:15 p.m. struck and a handful of students trickled out of buildings. Students seemingly hanging out at the Benson patio tables were actually attending their online classes. During what would typicallly be the busiest time of day on campus, six people could be spotted on the lower quad. And of course, they were all wearing masks, hesitant to interact with those outside their immediate social circles.

Many students now dream of the casual FDOC interactions they once took for granted.

“It’s a little sad because I don’t see as many people out and about talking and laughing like I used to,” said junior Rachel Irvin. “I’m sure it’s very hard for the freshmen.”

Irvin also expressed her frustration about the confusion surrounding her first day of classes.

“I was getting emails up until today for the classes I had today about which way we were going to have class, online or in person, so I was a little confused,” Irvin said. “It’s hard because it’s up to each professor and how they want to communicate. I got emails from some every day this week, but heard from others for the first time today.”

However, for freshman Sophia Iltis, the day went better than she expected it would. Though both her classes were online, she is eager to get into a routine rather than continue roaming around campus.

“We went over the syllabus and what the semester will look like based on COVID,” she said.

Iltis opted to attend both her online classes from her dorm room, whereas freshman Sydney Smith sat outside Benson and tuned into her virtual classroom.

“If you asked me a year ago how I thought my first day of college would be, I definitely would not be thinking it would be like this,” Smith said. “But considering everything that’s going on and having finished my senior year [of high school] online, I was expecting it to go this way.”

Senior Mariana Trabanino also explained that her expectations for the semester are realistic, not high or low. She described her first day of classes as “anti-climactic” and “low-energy” compared to previous years.

“Wake is all about the student-teacher ratio being so small and classes being super intimate so this is kind of strange,” Trabanino said. “It’s a lot to take in.”

However, she found comfort in knowing that she and most of her upperclassmen peers already experienced online learning at the end of the spring semester.

“We ended last semester the same way we are starting this one,” she said.

Though Trabanino is embarking on her final year at the university and is well immersed in her course of study, freshmen Mitchell Hark and John Krouse are facing the challenges that come with online learning as they begin their academic careers at the university.

“You can’t really connect with your teacher right away,” Krouse said. “It’s going to be tough to build a connection with them.”

His professors emphasized the fluid nature of the semester, and that expectations will likely change from week to week. For Hark, the day went exactly as he expected.

“This is what happened at the end of high school for us,” he said.

Students will undoubtedly face obstacles as the semester progresses, but professors are still learning the ropes of online learning as well.

For professor Rajan Puri of the Mathematics and Statistics department, internet problems plagued his first day of teaching.

“I had to start my class today on Zoom on my phone due to problems with my internet,” he said. “But later in the class I was able to switch over to my computer.”

This is just professor Puri’s second year of teaching at the university, but the difference between last year and this year is stark for him.

“Face to face versus online learning, it’s a totally new experience,” he said. “We don’t get that one-to-one interaction with students.” He has also found that students are generally less engaged and less motivated to work in this new environment.

This year’s FDOC was the first of many days of distant learning. As students and professors navigate and adapt to the online learning landscape, there is no mistaking that the start of the semester is a bleak one.