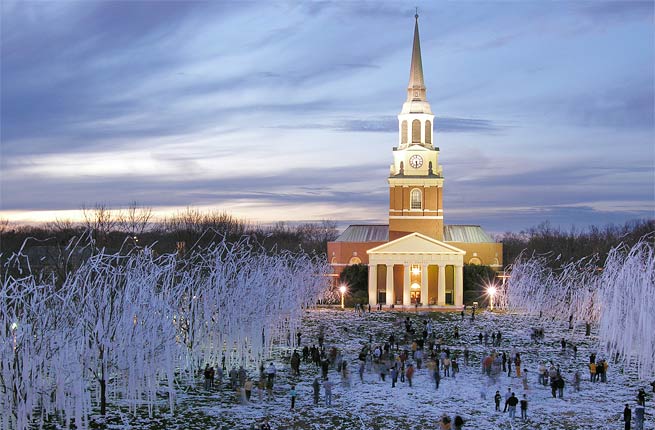 Undeniably, under the nickname “Demon Deacons,” Wake Forest possesses one of the most unique mascot names in all of collegiate athletics. Yet, one could argue that a significant number of alumni and current students lack the understanding of where that name originated.

Initially known as the “Old Gold and Black” or even the “Fighting Baptists” (recognizing the college’s original tie to the Baptist church), Wake Forest athletics lacked the intimidation factor on the front page of a gameday program, falling short of the common moniker of “Tigers” or “Wildcats” coined by other institutions. However, in 1923 Wake Forest conceived a nickname of its own, not at the hands of the Athletic Department, but rather from an unlikely source — Mayon Parker, the Sports Editor of the Old Gold & Black.

Under the leadership of new head coach Henry “Hank” Garrity, Wake Forest football was in the midst of one of its most successful seasons in recent history and was looking for a season-defining win as it prepared for its annual classic

Parker (’24) wrote a preview for this game on Friday, Nov. 9 that argued Wake Forest was on the verge of proving its place as one of the premier programs in the state.

“This is going to be one of the biggest occasions that the Wake Forest students have had in quite a while,” Parker wrote.

“They are going to prove to the people throughout that Wake Forest not only has one of the strongest football teams in the state, but also an excellent spirit.”

In the midst of these words of optimism, one statement written by Parker forever changed the future of Wake Forest athletics. It was in this publication that Parker coined the name “Demon Deacons,” as he believed Garrity’s football team needed an edge to compete with the Blue Devils of Trinity (which later became Duke University).

And after Garrity’s “Demon Deacons” emerged victorious with a 16-6 defeat, the nickname stuck as the college’s publicity director, Henry Belk, began using the name in his press releases.

Thus, as we commemorate 100 years of the Old Gold & Black it is important to remember the impact it has had on this university, even for something as seemingly simple as the athletic mascot.

As we reflect on a century of the student newspaper at Wake Forest, let us celebrate the incredible athletic achievements that have given our paper both substance and readership, ranging from exceptional seasons, individual accolades and professional successes.

Other Wake Forest teams have played exceptional seasons without winning a national title — such as the 2006 football team.

Head coach Jim Grobe led his football team to the Orange Bowl as ACC Champions in a thrilling Cinderella-esque season as preseason polls were predicting the Deacs to finish last in the conference.

With the likes of Arnold Palmer and Brian Piccolo, Tim Duncan and Chris Paul, Jennifer Averill and Skip Prosser, the Old Gold & Black has had the pleasure and honor of reporting on some of the most successful athletes and coaches at any level, from generation to generation. We thank these individuals as well as countless others who have given us headlines and provided us with inspiration each week.

It is our hope that a century from now the editors of the Old Gold & Black will be able to reflect with an analogous degree of respect and pride for the “Demon Deacons” that we can today.