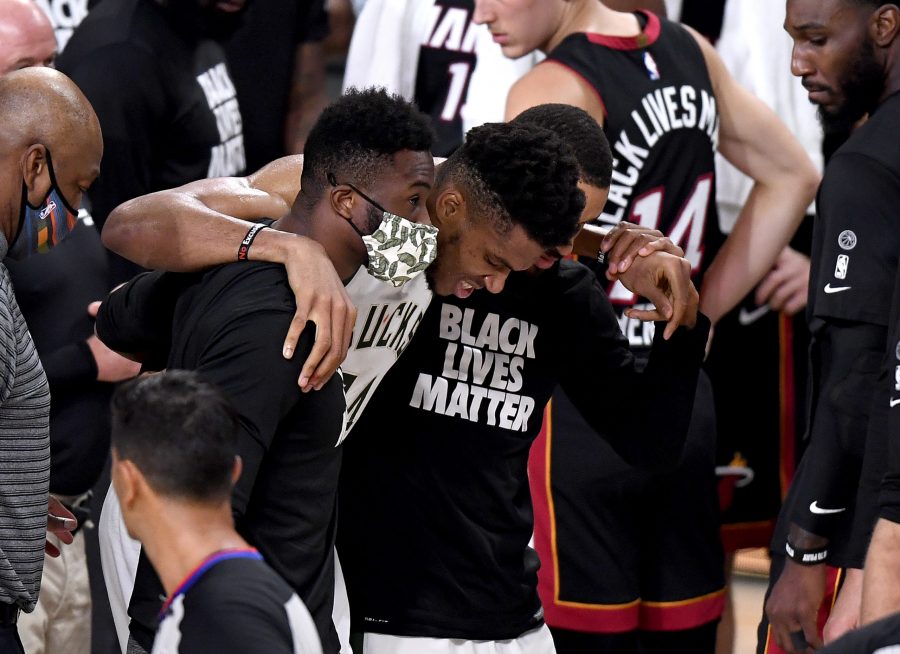 Giannis Antetokounmpo #34 of the Milwaukee Bucks exits the game after an injury during the second quarter against the Miami Heat in Game Four of the Eastern Conference Second Round during the 2020 NBA Playoffs at AdventHealth Arena at the ESPN Wide World Of Sports Complex on Sept. 6, 2020 in Lake Buena Vista, Florida. (Douglas P. DeFelice/Getty Images/TNS)

As of Monday, Sept. 7, the Milwaukee Bucks find themselves in a heap of trouble down 3-1 to the Miami Heat in the Eastern Conference Semifinals. After staring down the barrel of a humiliating 4-0 sweep, the Bucks scrapped their way to an enthralling 118-115 overtime win on Sunday. What’s even more impressive is that they did it without the reigning league MVP and newly anointed Defensive Player of the Year, Giannis Antetokounmpo, who left the game with an ankle injury at the start of the second quarter. With Giannis sidelined, All-Star forward Kris Middleton stepped up, scoring 36 points — including the dagger over Tyler Herro which put the Bucks up by four with six ticks left in OT — while grabbing eight rebounds and eight assists in a Herculean effort to save Milwaukee’s season. While the Bucks performed admirably in game four, I believe they’ll need to summon something special to compete in game five and beyond. The Heat have looked like the better team all series, being able to capitalize on Antetokounmpo’s struggles as a perimeter shooter. Through three games the Bucks were outscored by 34 points with Giannis on the court, the lowest +/- number on the team. By turning Milwaukee’s biggest asset into a weakness, the Heat clearly have the Bucks on the run, scrambling for answers.

On Monday night, the Boston Celtics dismantled the Toronto Raptors en route to a 111-89 victory which saw Nick Nurse withdraw his starters with six minutes to go in the fourth quarter. Now many might be predicting an easy Celtics win on Wednesday night but let me take a minute to remind you all of who this Raptors team is. In the regular season based on defensive net rating, the Raptors allowed the second fewest points per 100 possessions. Furthermore, against teams with a top-10 point differential, they had allowed the fewest points per 100 possessions (we all know the phrase “defense wins championships”). From Jan. 13 to Feb. 11 the Raptors went on a franchise-record 15 game winning streak. During that stretch they averaged 121.2 points per game and shot over 50% from the field. This helped them finish with the second best regular season record in the league. Let’s not forget, this was a team that most (including me) counted out after Kawhi Leonard left for Los Angeles this summer. In fact, the ESPN “experts” panel only predicted them to finish sixth in the Eastern Conference before the season started. But despite all the chatter, Pascal Siakam took another huge step towards becoming a for-real NBA superstar, Kyle Lowry solidified his standing in the league as a Chris Paul-esque-this-guy-won’t-let-your-team-lose-without-a-fight type point guard, Fred VanVleet played himself into a big-time contract offer this summer, OG Anunoby took another step and Head Coach Nick Nurse won the award for the NBA’s Coach of the Year. They might not have been your traditional title defenders, but they certainly stepped up to the challenge this season. I don’t know if Wednesday night will be the last time we see the 2019/2020 Raptors, but they certainly won’t go down without a fight.