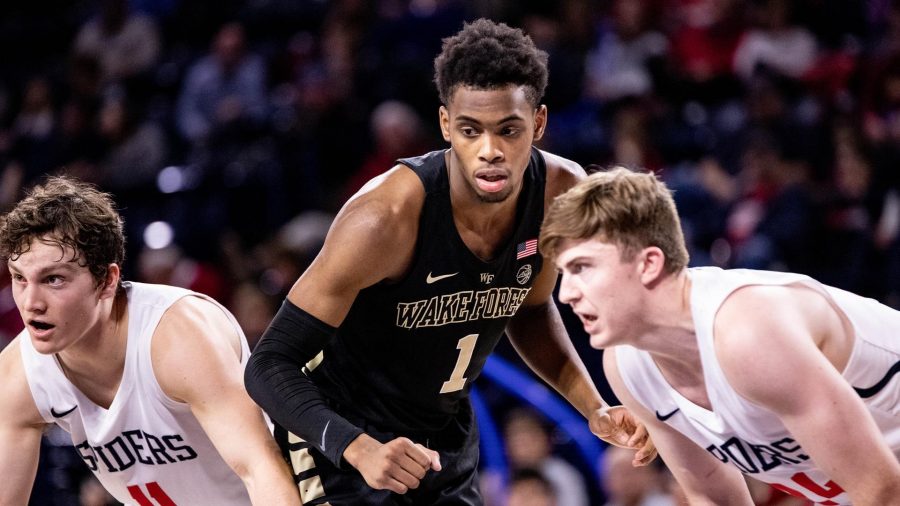 Isaiah Mucius is a junior at Wake Forest majoring in sociology and a member of the men’s basketball team. He is one of the highest touted returners on newly-hired Head Coach Steve Forbes’ squad — last year he started in 22 games and appeared in 30. During this sophomore campaign, Mucius averaged 7.3 points and 4.7 rebounds. He hails from East Patchogue, N.Y., and played high school basketball at the well known Brewster Academy in Wolfeboro, N.H. Isaiah was honored as the 2018 USA Today New Hampshire Basketball Player of the Year and was a consensus 4-star recruit (no. 72 in Class of 2018) when he committed to Wake Forest. Recently, he sat down with sports writer Essex Thayer to discuss his team’s participation in a local Black Lives Matter rally, his role as an activist and how the team is preparing for a season unlike any other.

Essex Thayer: You were quoted multiple times in an article published by WFMY News in late August regarding the activism and protests that the basketball program took part in following the killing of Jacob Blake. What did this experience downtown mean to the program, and to you, personally?

Isaiah Mucius: This experience meant so much to myself and the program. As a young man of color, having my team there and seeing them stand with me and fight against the social injustices occurring around the country made me happy and proud.

ET: Is there a specific pro player or team that’s inspired the program in the fight for equality?

IM: I think the NBA as a whole has inspired our team. Having Black men on our staff and our team, we are inspired to fight for each other.

ET: Are there any further steps or actions the program is looking to take regarding BLM in the coming weeks and months?

IM: As a team, we are continuing to educate ourselves and have those tough conversations that will help break the uncomfortable barrier. We are planning on trying to watch some films like 12 Years A Slave or Roots to better understand how Black people have been oppressed for hundreds and hundreds of years.

ET: What has the team’s preparation been like for this upcoming season, and how much has COVID-19 played a factor?

IM: Obviously, COVID-19 has made things a lot tougher than they usually would’ve been. But, we have been great as a team and have yet to have a positive case, knock on wood, so we have been able to get the entire team on the floor during the past couple of weeks.

ET: Can you speak to the support that the Athletic Department has provided to the basketball team during the past few months?

IM: The Athletic Department has done such a great job keeping us safe while we are going through this season and school year. I have honestly been really happy and have felt safe while I have been on campus, so they have done a great job.

ET: Wake Forest was the only Power 5 team in college basketball to hire a new head coach during the pandemic. What has the transition been like with Coach Forbes and a “reborn” program in such a trying time?

IM: It was a challenge at first because the first time we were able to meet the coaching staff in person was in July, when usually we would be on campus [as early as] late May. But, Coach Forbes did a great job building relationships with all of us, so once we did meet in person, it felt like I had already known him a long time. Since we have gotten here, [Coach Forbes] has been great and continues to build relationships with each one of his players.

ET: Is there a different style of coaching and preparation that you have experienced with Coach Forbes as opposed to that of your first two years within the program?

IM: There is definitely a different coaching style than that of my first two years here. [Coach Forbes] likes to be aggressive on both ends of the floor and turn defense into offense. There is a lot of passing, cutting and learning to be an unselfish player.

ET: For a time in the spring, there were concerns that you might follow in the path of other former Deacs and transfer to another school. I think I speak for a lot of Wake when I say that we’re glad you’re still here. What kept you here in Winston-Salem?

IM: I am 100% glad with my decision to stay. I think what kept me in Winston was a lot of unfinished business that I didn’t want to leave undone. I didn’t want to leave this place with a bad taste in my mouth, and once I found out Coach Forbes got the job, I did my research and spoke to him. From then on, I knew that he would be able to take this program to where we want to be.

ET: What are your expectations for this upcoming season, both personally and as a team?

IM: For our team, I have super high expectations. I want to win our conference and make it to the tournament. With the guys we have, I know we have the ability to accomplish that. Personally, I want to take a big step, not only as a player, but also as a leader. With this being my third year here, I need to be someone the guys can look up to in any situation.