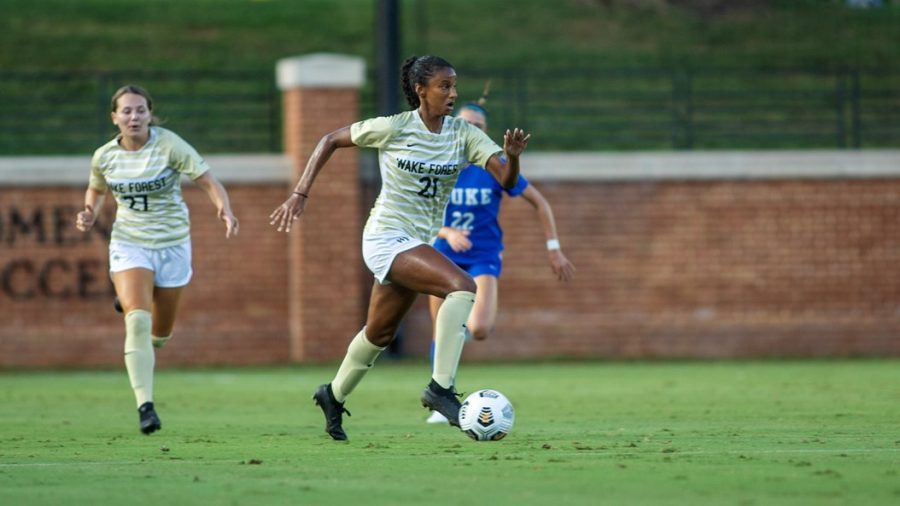 Under the floodlights of Spry stadium, uncharacteristically quiet with fans relegated to the narrow sidewalk between the usually packed grassy-hill and Polo Road, the 2020-2021 Wake Forest soccer seasons began this past week. With rosters replete with fresh faces, and coming off a lengthy offseason, Wake Forest Men’s and Women’s soccer kicked off their seasons with games against Duke and Pittsburgh, respectively.

Women’s soccer was first up, opening their season with a dramatic 4-3 overtime loss to Duke that proved the teams potential but also highlighted areas where improvement is necessary. Wake Forest’s youthful side was evident, as five freshmen made their first start for the Demon Deacons; and the team struggled early, conceding in the seventh minute. Senior and veteran Ryanne Brown brought the match level in the 38th minute, scoring a critical goal to even the playing field going into halftime. Shortly after the restart, however, Duke scored to retake the lead.

Two quickfire goals from Freshman Carrie McIntire and redshirt unior Sofia Rossi in the 60th and 61st minutes took the Deacs in front 3-2, a lead they held until an 88th minute equalizer by  Duke junior Marykate McGuire sent the game into overtime. McGuire stuck again in the 96th minute, burying a shot from outside the box to end the game.

McGuire was her team’s top scorer last season and looks ready to take the next step in 2020. In last Thursday’s game, she recorded 10 of the Blue Devil’s 23 shots and assisted on the team’s second goal. Although a non-conference match, Thursday’s match provided ample optimism for a team looking to improve upon last year’s campaign in which they only recorded one win in ACC play. Their first conference game will take place on the 17th at UNC before the team travels to Duke for a rematch on the 20th.

The Wake Forest Men’s Soccer team began their season with an exhibition match against Pittsburgh last Sunday, winning 3-2 in a match that was overshadowed by an injury to Redshirt Senior defender and captain, Michael DeShields.

Following a heavy collision with redshirt freshman goalkeeper Cole McNally and Pitt forward Edward Kizza just minutes into the second half, DeShields was taken off the pitch in a stretcher and transported to Wake Forest Baptist Hospital. While being tended to by local EMS and Wake Forest Athletics trainers, the entire men’s team gathered in a circle at midfield before processing over to give their well wishes to their leader, both on and off the pitch. DeShields gave a thumbs up as he was stretchered off, a welcome sign for the star defender who was recently named to the ACC preseason watchlist. Thankfully, DeShields was discharged from the hospital Tuesday and is expected to make a full recovery.

Sunday’s match brought Pitt head coach Jay Vidovich back to Spry stadium, where he had great success over a twenty-one-year stint that included Wake Forest’s only NCAA soccer championship. Current Wake Forest head coach, Bobby Muuss, first came to Wake Forest as an assistant for Vidovich. He held the role from 2001-2007, left to coach for several years in Denver, and then returned to serve as head coach following Vidovich’s departure in 2014. With nine combined ACC Coach of the Year awards, Muuss and Vidovich remain two of the most successful coaches in ACC history.

With the departures of senior starters Alistair Johnson, Joey Dezart and Bruno Lapa leaving sizeable holes in Wake Forest’s offensive and defensive setups, along with the absence of star attackers Aristotle Zarris and Justin McMaster due to ACL injuries, Sunday’s exhibition allowed new talent to shine and role players to step up. All three of Wake Forest’s goals were scored by freshmen; Garrison Tubbs and Chase Oliver each found the back of the net in the first half, putting the Deacs ahead by two going into halftime.

Oliver was the standout performer, winning the free kick that led to Tubbs’ goal before finishing from a tight angle with minutes left in the first half. It was Oliver’s second goal, which proved to be the game-winner, that was the most dramatic. After two Pitt corners were turned in — courtesy of Alexander Dexter and Kizza — to tie the game at two, a superb volleyed effort in the 81st minute restored Wake’s lead. Oliver’s celebrations were equally impressive, marking his first goal with a Black Panther salute in tribute to the late Chadwick Boseman and an Aubameyang-esque backflip to punctuate his late winner.

Wake Forest Men’s Soccer will open ACC play Friday, Sept. 18th at Clemson. The game should be an exciting one to watch, as the Tigers were ranked just ahead of the Deacs in the ACC preseason coaches’ poll.