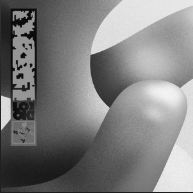 Shimmertraps has evolved beyond their early lo-fi tendencies with their latest album, LOOK!, which flew under the radar during its summer release, but warrants much more buzz. Their prior album, Ozius, came out in 2017 and appears now as a blueprint of the depth of their sound. Where Ozius was all fuzzy sounds and shoegazy ramblings, LOOK! has morphed into a highly complex conglomerate of recent music trends. I can only liken their sound to vaporwave artists like St. Pepsi (Skylar Spence), or layered lo-fi like Goth Babe; somehow they manage to operate between these two worlds. Their direction pivoted much more into disco, though there is still a quiet, made-in-the-basement sincerity lingering from their first release. It altogether feels serious musically. Each song has some weight, making their previous endeavours and fellow contemporary releases seem flimsy. The basslines are funky and you can expect that each song will build a tension and release that makes dancing along simply inescapable. Interestingly,  there is some element of them arriving here before their time.

A few songs stand out for their especially three-dimensional-feeling grooviness. Coming after the title track, “Jules Quesnel,” feels as if you are entering a french discotheque in the year 3000. It begins with a small interlude; it’s like water is rushing over the track and slowly drifting back to sea, a french woman speaks passionately in the background. You wonder where this is going, and then the drums pick up and it’s as if you’re thrown to the ocean — sound enveloping your ears as if you’ve just hit water headfirst. It is familiar enough to be highly listenable, yet futuristic enough to feel as if you’ve never heard anything like it. Another standout is “Beta Club.” It begins unassumingly, a simple drum beat and guitar riff start the first four measures, but then a strange staccato synthesizer pecks at the song; lifting it up and down in it’s goofy way. Initially it feels childish, but before you can flick to the next song, the totality of sound comes in and immediately exalts what once appeared kitschy. To build that level of depth around such a dorky element is truly a commendable feat. One that hints to vaporwave influences which chop and screw miniscule, often strange sounding, components of sampled work and turn them into the basis for a song.

I can find no other band right now that is on the pulse of music the way Shimmertrap is — it seems they can synthesize polarities in the state of music today. Combining barebones lo-fi with ironically overproduced vaporwave created a sound for LOOK! unlike any other release of the summer. It is much more allusive than bedroom pop, but halts before it comes to making the entirety of their sound from sampled works. This creates something that feels highly original and invigorating. Shimmertrap makes serious music that alludes to the goofy and innocent iterations of their influences, it is this applied consciousness that makes them great.