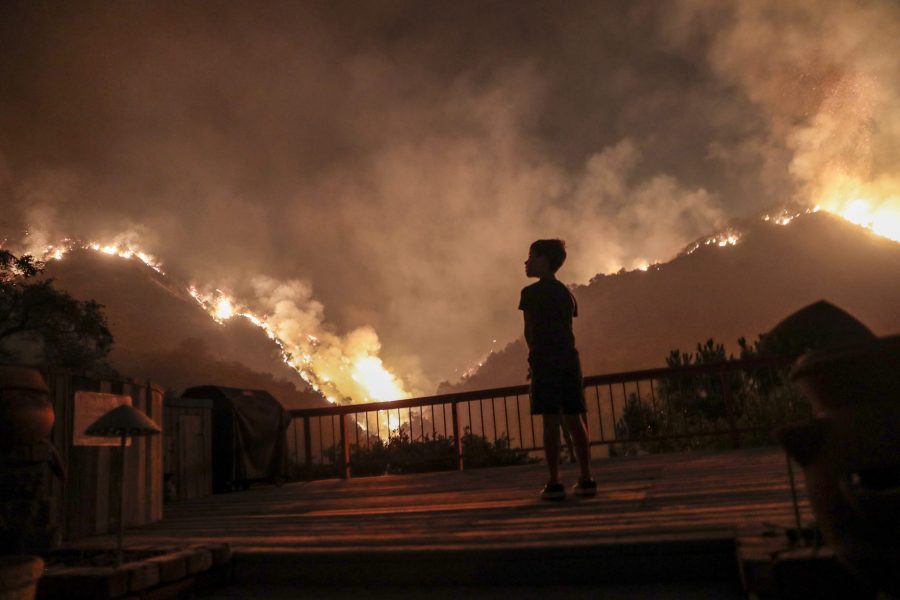 Monrovia, CA, September 15, 2020 - Castle Snider, 8, looks on as flames engulf the hillsides behind his backyard as the Bobcat Fire burns near homes on Oakglade Dr. (Robert Gauthier/ Los Angeles Times/TNS)

The Earth is in danger. This headline has circulated so many times in this century that the sentence has lost its meaning. Although history has shown constant patterns of natural fires, the inevitable march of our global population has created a far more erratic and dangerous modality. Across the recent decade, the amount of global wildfires has increased statistically — with extremely significant environments being threatened and millions of acres of property being destroyed. But this is just the beginning of the future devastation that is headed our way.

It is inarguable that the progress of industrialization and residential development into the wild has provoked devastating consequences. However, what many scientists and advocates against the concerning reports suggest about comparing modern statistics to those of the early 20th century is starkly wrong.

The information capturing systems of almost 100 years ago double and triple counted the acreage affected by the fires, while in 1983 the advent of computer modeling and sophisticated counting methods were able to accurately number and measure the total amount of land impacted by the wildfires.And there are many more signs that are glaringly obvious. The rising temperatures in the Western U.S., specifically California, are one to  two degrees higher than the average across many groups of decades in the 20th century. The climate variable fuel aridity is another indication of the artificial cause behind the devastation of the forest fires. Society has gradually repressed natural fires in order to protect development — thus increasing the growth of dry brush and plant life that should have been burned. For decades authorities have unknowingly created a time bomb that will ravage countless lives and invaluable amounts of land.Many people know about the current struggles of people and wildlife in vulnerable ecosystems, yet the issues feel far off and their effects delayed. The sky even turned orange and red in parts of California and the images only occupied national attention for a couple of days. It is clear that effective action will only be taken when the citizens of the nation — and the world — are captivated. But far more alarming is the spread of fire in the Amazon.

Effective action will only be taken when the citizens of the nation … are captivated.

The rainforests which have been called the ‘air conditioners’ of the planet are being decimated mainly by man-made fires.

Just as citizens in the United States have foolishly caused unimaginable harm to their own environments, the people of Brazil and other independent actors continue to damage the Amazon rainforests in the name of profit.

Over 8,000 fires have been reported in just the first week of September. This is an event that impacts the entire Earth, but focuses more on those who live in Brazil, and in the Amazon rainforest.

The territory of the indigenous people is being interfered with. Their agricultural property and resources to sustain life are being taken away from them and damaged by the harmful fires. Pollutants enter the air when fires are started to clear the area that remains after deforestation — another behemoth of a problem in the Amazon.

Specifically the pollutants include the harmful particulate matter, which can cause harmful diseases to anyone breathing in the air near the fires. It will only be a matter of time before the issues that people in the Amazon and the Western United States are dealing with have reached where we live. Although the global pandemic has caused a major reduction in carbon emissions, these deadly fires promise to provide even more of an increase to carbon dioxide levels in the atmosphere. And just like always, it’s up to us to stop it. That call to arms may seem as dilapidated as ever, but the time is coming soon where it will be too late to hear it.