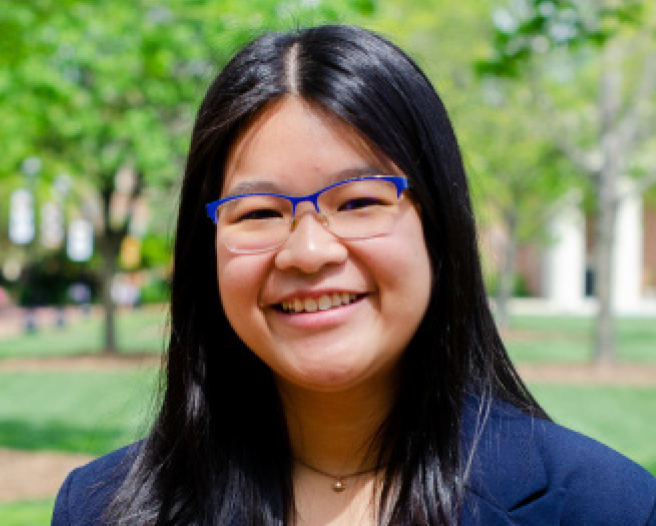 In Latin, the verb ending “bam” indicates something one did in the past. For example, the Latin word vincabam means, roughly, “I succeeded”. In the Classical Studies major, one person who definitely has a right to say she succeeded is Bam Purcell.

“We were reading Cicero,” Purcell recalls. “I never imagined myself being interested in ancient texts before, but we were talking about his philosophy on old age and on how to live a good life. And I just found myself thinking about these things outside of class and like seeing how it applies to my life and to everybody’s lives.”

Purcell continued: “I was just really surprised in a pleasant way that I was enjoying these classes. And even though I still liked chemistry and biology, I found they didn’t have that same draw and interest that I found in classics.”

Sloan, for his part, sang Purcell’s praises — and quoted Cicero while doing so.

“Bam is an excellent student; she exhibits all the laudable qualities that occasion great joy in teaching,” Sloan said. “The first Latin text we read together was Cicero’s Pro Archia, so perhaps it is fitting that I paraphrase a line or two from that text to characterize my opinion of her: ‘It seems to me that nature without learning more often leads one to glory and virtue than mere learning. Yet, when one adds a rigorous education to a commendable and kindly disposition, then one becomes a person of singular and distinguished excellence’ such as we find in Bam.”

Another of Purcell’s favorite professors in the Classics Department is Dr. John Oksanish, with whom she took her Latin Seminar on a familiar topic.

“I think it was also on Cicero, which is interesting because my initiation to classics was Cicero,” Purcell said. “But with his class also, I’m just so impressed at how passionate Dr. Oksanish is. He knows so much, and I really like how he’s able to analyze one word for an hour. I feel like that could raise the question, ‘why is that fun? Like, why is it interesting?’ But I think like the energy of the professor is really infectious — when they’re excited, I get excited.”

From his comments to the Old Gold & Black, it appears Oksanish is also a member of the — unofficial, as of now — Bam Purcell Fan Club.

“First, Bam is a really deep and reflective thinker, and she chooses her words with care and precision — both vanishing virtues,” Oksanish said. “Second, Bam has been in at least one class with me every semester since spring of 2020: I’ve valued our conversations about the weird, ineffable experience of living through this global pandemic in its various stages, and how studying ancient texts written in times of crisis could illuminate the sometimes existential questions that the last two years or so have made more immediate to many of us.”

Purcell noted that one of her biggest challenges was identity formation in college.

“I think it was kind of a culture shock to be in a school that is wealthy and predominantly white,” Purcell said. “I was trying to find out a bit more about, who I am, where I stand on social issues and my identity.”

In addition to her work in the Classics Department, Purcell has been involved with the Summer Nonprofit Internship Program (SNIP) and has worked with United Way. Purcell says her classics background informs her work.

“I did work with United Way and my supervisor runs the team on housing and homelessness. And so every team meeting, she has to use her language to be clear and concise and really explain why we are doing this so she can motivate her team. I got to connect the way that language is used in classics and see how it’s used in nonprofit and social justice work.”

Purcell’s next position will be close to the Classics Department, as she will be joining the Dean of the College’s Office as a fellow.