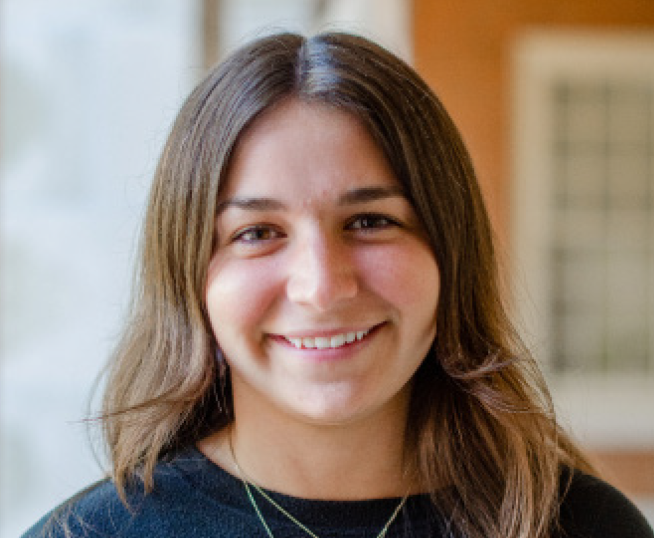 Among many other factors, one thing that really drove Grace Lyons to Wake Forest was the weather; North Carolina is far warmer than a Massachusetts winter.

“I hated the cold weather,” Lyons said. “Then I took a tour of the campus and absolutely loved it.”

Early into her time in Winston-Salem, Lyons found a home in the economics department.

“I decided to take ECN 150 to see how I liked it. My brother was an economics major,” Lyons said. “I took the class in freshman year with Professor Megan Regan and loved it. I liked the quantitative nature of it and the ability to problem-solve.”

While that first economics class set Lyons towards being an economics major, many people had an impact on her academic career along the way.

“The most impactful professor I had would probably be my thesis advisor, Amanda Griffith,” Lyons said. “I’ve met with her quite a bunch, and she’s been awesome as a mentor in economics, but also just in life and giving advice.”

Professor Christina Dalton also proved to be important to Lyons’ time in the department.

“I do research with Professor Dalton,” Lyons said. “I’ve worked with her now for two years. So she’s also been a huge role model in the department.”

Along with having several important professors, Lyons mentioned classes that drove her interests.

“I took a global health class in economics,” Lyons said. “The class looked at healthcare in developing countries and how to use economic mechanisms to help people save for emergencies. ”

Outside of the economics department, Lyons credits an interest in science with courses in bioethics and epidemiology. Lyons was also involved in several extracurriculars.

“I’m the president of the Club Equestrian team on campus,” Lyons said. “That’s something that I enjoy having, getting to continue to horseback ride throughout college.

Being a tour guide, teaching assistant and research assistant was also impactful.

“All these extracurriculars have really just strengthened my sense of community here at Wake Forest,” Lyons said. “I knew I wanted a small school because I enjoyed having that close knit community.”

After several years in the economics department, Lyons has a lot of advice to offer.

“Reach out to the faculty in the department,” Lyons said. “A lot of the things that I’ve gained from the department have been from making connections with faculty and doing research.”

Lyons continued: “If you take a course you like, go and speak to the professor about their research and learn what they do. They are really helpful.”

“Grace has made so many wonderful contributions to the economics department in her four years here,” Griffith said. “She has really stood out as one of our best students with her thoughtful and careful approach to research.”

After graduation, Lyons will move to Washington D.C. to work for Deloitte in their Government and Public Services consulting group. But she’s also thinking long term.

“I’m hoping to do that for a little while,” Lyons said. “I’d love to go back to school at some point and maybe get a Ph.D. in economics or behavioral economics.

For now, though, Lyons is looking back on her time at Wake Forest fondly.

Wake Forest has been an amazing experience for me,” Lyons said. I feel like I’ve made so many connections that I will keep with me for the rest of my life. Whether that be faculty or friends, it’s become a second home and I’ve loved every minute of it.”