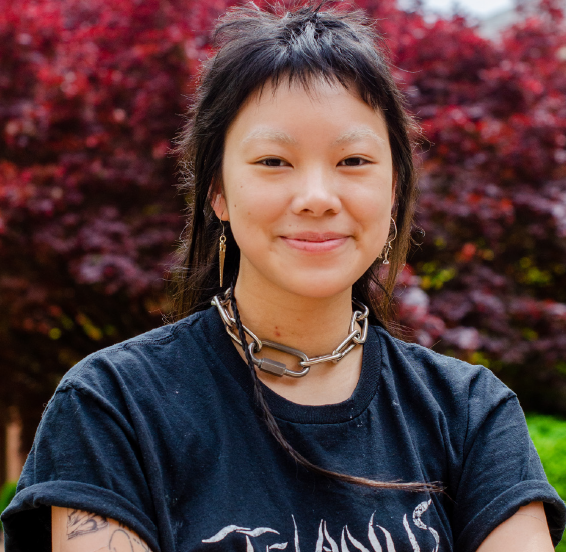 Quynh Nhu-Vu entered Wake Forest knowing that art was a discipline that she wanted to pursue, but it wasn’t exactly easy to translate this passion due in part to her background as a child of immigrant parents.

“Since being a sperm cell, I knew I wanted to draw pictures and make art, but given that I am a child of immigrants, I have always felt pressure from my parents and extended family to view art as a hobby and a side hustle,” Nhu-Vu said. “I remember during my college application times, I was desperate to find a different academic interest … Art always came back to me.”

Nhu-Vu acted on what felt natural to her, and art was what she resonated with. Nhu-Vu draws on her lived experiences and aspects of her identity in the art that she creates.

“Sometimes I like drawing because they’re cool to me, but I [also] feel like everytime anybody draws anything, it has to do with what they’ve lived through — no matter how little,” Nhu-Vu said. “No matter how unintentional or intentional it is, they are telling people about the world that they lived in.”

Currently, Nhu-Vu’s art has shifted from exploring an angsty source of decolonizing herself as she describes it — where she researches and reflects on imperial and cultural influences — to her art reflecting domestic and shared spaces, alongside intimate events of her life.

When reflecting on her time at Wake Forest, Nhu-Vu spoke fondly on the intimacy of the Art Department and the relationships that resulted from that.

“The art department is pretty small and the classes are relatively small, and I like that because your professors — a lot of the time — are more like mentors to you,” said Nhu-Vu.

In particular, Nhu-Vu credited Professor Leigh Ann Hallberg as a source of mentorship and guidance. Nhu-Vu says Hallberg’s classes shifted the way that she approached drawing.

“I remember meeting Quynh as a first-year and thinking that she was already a very self-contained, interesting and open person,” Hallberg said.

Hallberg continues, “When she told me she was off to Copenhagen, I was disappointed not to be able to work with her in her first year. On her return, she was energized and clearly ready to engage in creating work. Her shift to functioning as an artist came as she committed to spending more concentrated time working. Currently, Quynh is showing in professional venues and her work is getting lots of attention.She will be working with the Mint Museum for an exhibition in the fall. Quynh has the ‘art bug’, i.e. a real love of art, and my hope is that she will continue to direct all her energies toward art.”

During her time at Wake Forest, Nhu-Vu did not always feel comfortable with the environment of the campus community and felt a stronger connection to the Winston-Salem community.

“It wasn’t until last semester that I felt comfortable here — especially coming from the neighborhoods of Charlotte … where it’s really rare to walk into an art space in which white people are the majority,” said Nhu-Vu.

Despite this, Nhu-Vu’s relationship with the academic staff and professors of Wake Forest made her feel a sense of belonging.

“I think what really helped was [having] that relationship with the professors,” Nhu-Vu said, “that’s what made me feel included, knowing that my professors supported my work.”

Looking towards the future, Nhu-Vu’s main point of excitement is the prospect of being an adult with lived experiences — similar to many of the people that she is surrounded by in the art scene.

“I’m excited to be 30,” she said. “A lot of my colleagues and my friends in art are around [that age] and older. The art scene in Charlotte is a lot of people several years deep in their career.”

Nhu-Vu hopes to gain the wisdom that she describes her colleagues having and has many shows planned for the next two years with an art residency lined up in Charlotte at Goodyear Arts.