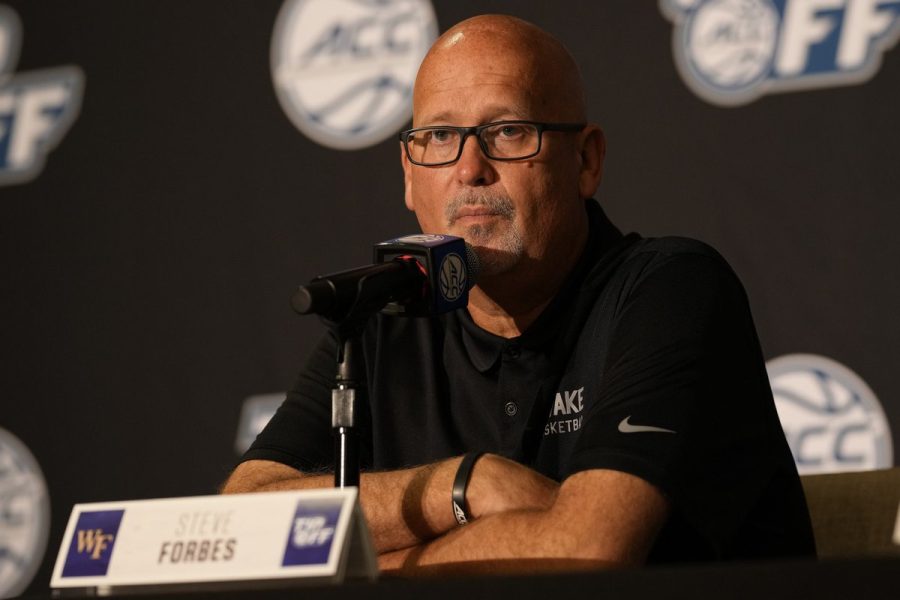 When Steve Forbes was hired by Wake Forest, the world was in chaos. COVID-19 was ravaging the country, and as a result, not much in college athletics changed when it came to coaching. Wake Forest was the only Power Five team to make a coaching change that summer.

“I interviewed for a couple jobs, but I never really found one that felt like it fit me,” Forbes said. “I turned down several, and then, finally, the right one came when [Athletic Director] John [Currie] called me.”

The city was shut down. So I did everything at home on my phone or on Zoom. It was unprecedented, and it wasn’t fair, not just to me, but also the players — I didn’t have a chance to bond with them after I got the job.”

Forbes continued: “[Currie] worked with me at Tennessee, and I had a really good relationship with him. I wanted to have a great relationship with my athletic director, and I felt a tremendous comfort level with him. I felt like he wanted this program to succeed. If I was ever going to leave East Tennessee, I wanted to go somewhere that believed in me as much as [ETSU] believed in me, and I felt like John did.”

While the belief was there, COVID-19 did not do Forbes any favors. After being hired on Apr. 30, Forbes didn’t meet any of his players face-to-face until July 20. In addition, Forbes had to convince several players to stay. Olivier Sarr, a top player for the program, left for Kentucky, but Forbes was able to keep Isaiah Mucius in Winston-Salem. The process of speaking to players and convincing them of his vision for the program all had to be done virtually.

“I came down here for a couple weeks and stayed in the [Marriott] Courtyard,” Forbes recalled. “Basically, the city was shut down. So I did everything at home on my phone or on Zoom. It was unprecedented, and it wasn’t fair, not just to me, but also to the players — I didn’t have a chance to bond with them after I got the job.”

Then, when the season began, COVID-19 came calling again. After a 2-0 start in an early-season tournament, nearly the entire team contracted COVID-19, forcing the program to shut down for 33 days. Following a tune-up victory over Division II Catawba College, Wake Forest lost their first six games in the ACC. Questions began to arise about whether Wake Forest basketball was salvageable.

For Wake Forest, the turn didn’t come in the first year as Forbes may have hoped. The team finished 6-16 with three wins in conference and bowed out of the first round of the ACC Tournament.

“It was hard for everybody,” Forbes said. “Losing is hard. I hadn’t done that in a while, and my wife Johnetta would get on me about it. I knew it [would be hard], but I didn’t want to go through it. I know [the players] wanted to win and they were trying hard. It was a very trying year for everybody.”