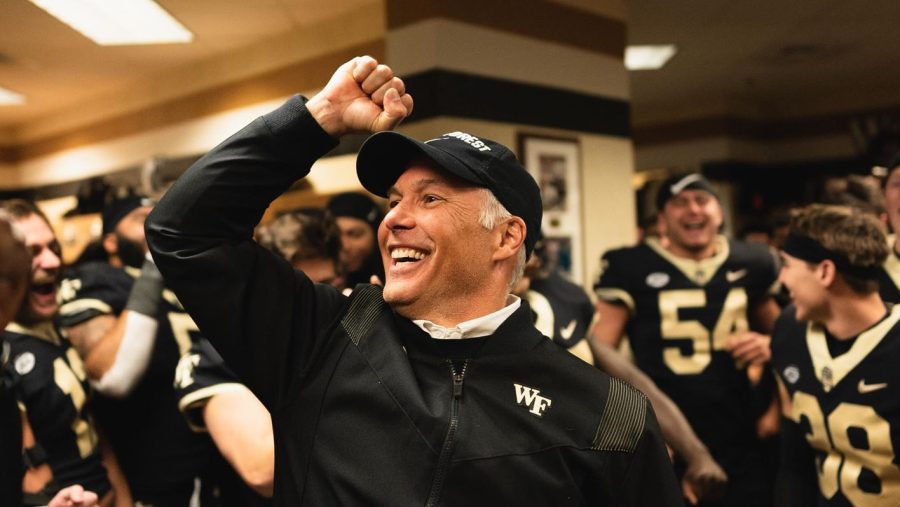 Clawson celebrates with his team after a win.

“I really believe the conflict of 2020 made our team even closer in 2021. That's where we came up with the theme of Good to Great. We've been a good program. This is the year that we take that step.” -Dave Clawson

After losing to North Carolina in 2020, Dave Clawson began to feel the seams of his team ripping apart. For a program that was supposed to be very good in 2020, the lack of success, along with the struggles of COVID-19, put a lot of stress and pressure on the situation. Something had to change.

“There was a breaking point where a lot of players wanted to opt out or not keep playing,” Clawson said. “There was a players-only meeting and I think things got pretty heated. Some of our captains — Luke Masterson, Sam Hartman, and others — drew a line in the sand that ‘we’re in this together and if you want to go, go, but don’t stay and complain.’”

That moment, while tough for the program, was the first step in getting to where Wake Forest football is today. The turning point for success in 2021 came in 2020.

“After that meeting, a few guys opted out,” Clawson said. “But after that, the rest of the team really gelled and bonded together. That’s when we came up with the theme of ‘Good to Great.’”

Clawson continued: “We were pretty bold about it. You can’t then go 5-7. We would have been a joke. But we felt good enough about the team that that was our challenge, to go from “Good to Great”. Collectively as a program, everyone embraced that challenge.”

In 2021, there were still questions lingering about the state of Wake Forest football after the failure of the 2020 season, especially in the bowl game. But within the program, there was confidence. This team was no longer just going to be consistently good, they were going to be great.

I think it’s always about raising standards, raising expectations. We are very proud of what we accomplished a year ago as Atlantic Division champions and Gator Bowl champions.”

The 2021 season began with two non-conference games – games that Wake Forest should have won handily. Yet, the fear amongst the student body was that these games would be close. Maybe the Demon Deacons would even lose. Not so. Wake Forest defeated Old Dominion 42-10 and Norfolk State 41-16.

But then, there was Florida State, which, while struggling, was a program built to win ACC Championships. Yet, by the time the fourth quarter expired, the Demon Deacons had won again, this time by three touchdowns. Wake Forest was 3-0, with a Friday night showdown set against Virginia in Charlottesville. To Clawson, Wake Forest was not anything special yet. Following a 37-17 victory over the Cavaliers, things changed.

“[After the game], we looked at each other and thought ‘we can be pretty good guys,’” Clawson said. “That was a good Virginia team, and it was at Virginia. They don’t lose at home. I think, at that point, the players realized that we were good, that we had a really good football team.”

After the game against Virginia, Wake Forest was ranked in the AP poll for the first time that season — at No. 24. Following a home victory against Louisville, the Demon Deacons were ranked No. 19. Then, the Demon Deacons were No. 16 after a road win against Syracuse, No. 13 after taking down Army in West Point and No. 10 after defending Truist Field against Duke for a program-best 8-0 start. Oh, and that No. 10 was Wake Forest’s highest ranking in program history.

Then came a trip to North Carolina. Win there, and Wake Forest would have been squarely in the conversation for the College Football Playoff, no matter how odd that sounded. Halfway through the third quarter, the Demon Deacons led by 18. By the end of the game, they had lost by three.

“You add up all those [mistakes] up … we helped them,” Clawson said days after the game. “We contributed to our own demise, and to their credit, they took advantage of it.”

Wake Forest responded by not furthering that demise against NC State. Following a field-storming win over the Wolfpack to maintain its hopes of winning the Atlantic division, the Demon Deacons fell to Clemson in an ugly road game, a result that plagued men’s basketball as well. That left a game against Boston College in Chestnut Hill to secure the division. With a win, Wake Forest would return to the ACC Championship for the first time since 2006.

It wasn’t even close.

Behind three passing touchdowns and one rushing from Hartman, Wake Forest left Chestnut Hill with a 41-10 victory and a ticket to a showdown in Charlotte against Pittsburgh.

In the ACC Championship, Wake Forest was able to play their game in the first half. The Demon Deacons scored touchdowns on their first three possessions. Except, they didn’t score for the rest of the game, losing 45-21.

“It’s been a really special season,” Clawson said following the loss. “We’re disappointed we did not win the game. I don’t think that takes away from the season we’ve had. We’ve had a great season. We’re the Atlantic Division champions, and we have a chance to go get a Bowl championship.”

Weeks later, Wake Forest was able to notch its 11th win over Rutgers in the Gator Bowl, tying a knot on what was one of the best seasons in program history. The bowl victory gave Wake Forest their first 11-win season since the infamous ACC Championship in 2006. To Clawson, that total, along with all that was accomplished, fulfills the “Good to Great” mindset leading into the season.

“I think it’s always about raising standards, raising expectations,” Clawson said. “We are very proud of what we accomplished a year ago as Atlantic Division champions and Gator Bowl champions.”

The raised standard, and the results on the field, were reflected in the student participation and hype for the team on campus. Against NC State, 4,584 students, clad in all-black, cheered on the Demon Deacons. That number comes out to 85% of the undergraduate student body, the largest student attendance for a football game in the history of the program.

Despite the loss in the ACC Championship, the signs of “Good to Great” were still there. Wake Forest’s final AP ranking — No. 15 in the nation — was the highest the program had ever reached in its history. And Clawson should be proud too. He himself went from “Good to Great”. Following the success of the 2021 season, he was named the ACC Coach of the Year.