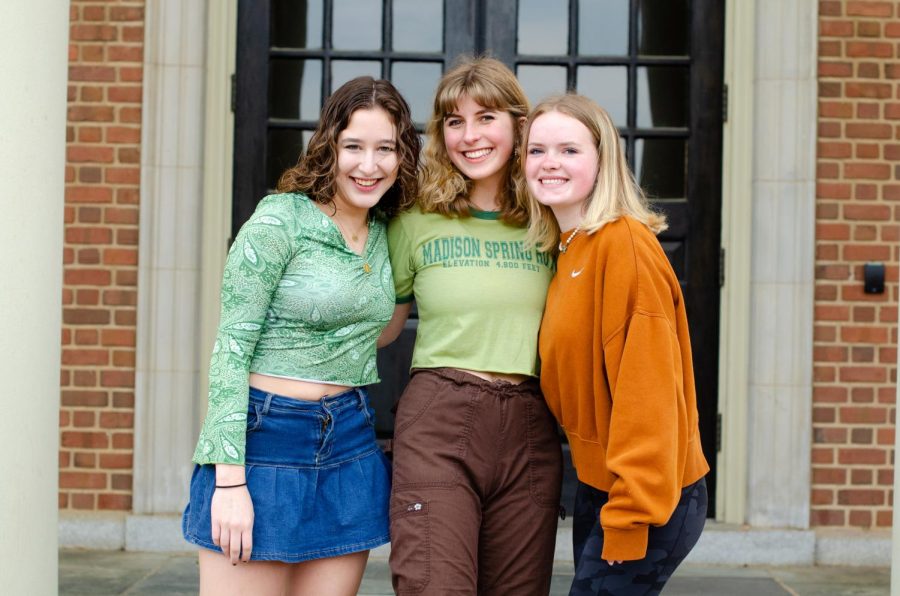 Photographer: Katie Fox From right to left, Chase Bagnall-Koger, Una Wilson, and Meredith Prince, the leaders of the features section, pose in front of Wait Chapel.

This year, the Old Gold & Black expanded its editorial board with the addition of a new section: Features. For the entirety of the Spring 2022 semester, the new editors, Meredith Prince and Chase Bagnall-Koger, as well as assistant editor Una Wilson – cultivated a compelling portfolio of feature stories, covering stories of both human interest and environmental science.

Throughout a chaotic news cycle and their first months as editors at the Old Gold & Black, Prince, Bagnall-Koger and Wilson worked together to create a dependable and innovative group of more than seven staff writers. These editors also created a calendar of Features and a well-curated section in the weekly print newspaper. Our online managing editor, Aine Pierre, sat down with the Features editors to reflect on what has been an exciting and groundbreaking new challenge.

Aine Pierre, Online Managing Editor: So the first question is, what do y’all think the Features section means to the Old Gold & Black and to the Wake Forest community?

Meredith Prince, Features Editor: Well, it sounds cheesy to say, but the features section for us is for featuring important things, important people, organization, groups, clubs identities on campus. And I think one of the best parts of the Features section is the fact that there’s a space for everybody and every group. We really tried our best to highlight a wide variety of groups to showcase the range of diversity that we have, especially, you know, on a predominantly white campus. So, it was really important for us to highlight some minority groups like the Black Student Alliance and the North Star LGBTQ Center in Winston Salem. And those are just some examples. But for us, it’s really about having a space for every story and every voice.

Chase Bagnall-Koger, Features Editor: I agree, I think it was a really great opportunity to create a space for stories that don’t necessarily fit into any other section and to just kino use our creativity to bring awareness to things that people might not otherwise know about. It was a really cool opportunity to do that.

MP: One big challenge, I think, was distinguishing between what was a news story, what was a life story, and what was a features story, because a lot of things that happen fall under the news category, and a lot of things that highlight people and their accomplishments fall under life. So one thing that was a challenge for us at first was finding our space and finding what kind of categories and areas belong to us and should be a part of the Features section. I think with practice, time and active communication with the other sections, we found where our space was.

CBK: It was really hard for us to get writers at some point in the year, and I think the OGB has done a good job of like, trying to turn that around not only for our section but for all the other sections with outreach. We did that club fair booth; I know Meredith was there and a lot of other people were, too. And after that, we did get a lot more people on the email list and a lot more interest because there is interest throughout the school. It’s just like a matter of bringing people in and getting them involved. And once we have like, people from those different groups, you can see a big difference in like the writing styles, and it really made our section stronger.

AP: What are some of your favorite things that you’ve had the opportunity to cover? And do you think those things would have been covered if there hadn’t been a Features section?

MP: My favorite article that I wrote was a Deacon Profile about Caroline Phillips, who is an alumna. Phillips is regarded as a Black female powerhouse in the business realm and she created the National Cannabis Festival, and she works in the cannabis industry, and her work is focused around black women, which is really awesome. It was really awesome to talk to her about that. And I don’t think that we would have really had this profile had we not had the Features section to you know, feature people like this. And because of the Features section, as people saw more profiles, we started to have alumni or people who work with alumni reach out and say “we would love to have this person featured.” And so that was really awesome just to get to talk to her and hear about kind of the social justice work she was doing, that was a really special opportunity for me.

CBK: My favorite piece I wrote was the Deacon Profile on Ashlyn Sanders. She created a device that helps people with epilepsy and other seizure disorders. It’s a harm reduction advice device for people who experienced that. During the interview, I shared my experiences, and she shared hers, and she’s such an interesting person. She is enrolled at Wake Forest’s medical school right now after taking some time off from school. It was just really inspiring and great to hear from her, and I really don’t think we would have connected otherwise because she did reach out to our section to talk about her entrepreneurship journey and her personal journey. And I don’t know if it would have been covered, and it definitely wouldn’t have been me writing it. So I was really grateful for that opportunity.

AP: In terms of going a bit beyond just Deacon profiles. What do y’all think have been some of the more successful things you’ve been able to do this semester?

CBK: I liked the Dating Deacons article. It was a lot of fun, and I think a lot of people read that one. Dating Deacons was something that I had never heard of before I got to campus. And so writing the article was it was really interesting because it was new to me. I actually ended up signing up afterward, and then I forced my friends to sign up (and to read the article). And I think it’s like it’s a cute way to get involved on campus, especially as a freshman you’re kind of thrown into it without having that like instant, immediate social group — especially because we rush in the spring semester. So it’s a cool way to meet new people. And to just realize that the little bubble you’re in is not necessarily the entire campus.

MP: Another thing is that there are some clubs on campus that are really popular, and I feel like everyone knows about or teams that everyone knows about. Everyone knows about Hit the Bricks. Most people know about Wake N’ Shake. And I think the really cool thing about our section is that it offers a space for groups that aren’t as well known but still deserve to have a voice and deserve to be known. So we covered the chess club, which was newly founded, and no one really knew about it, so we were able to kind of elevate their voice and their space. We covered Greeks Go Green, which isn’t as well known across campus when you think of Greek life. We covered the Women in STEM club. There are a lot of groups that we covered that, when I got to this campus, I didn’t know existed. So it’s really nice that we have the power as a Features section to elevate the voices of certain groups that might not otherwise have a place to network and share their experience.

AP: Can you tell me a little bit about like the environmental science beat, what that added to your section how that came about?

MP: Yeah, so our assistant editor, Una Wilson, is very into environmental science, She’s very sciency and very, very passionate about the Earth and sustainability, and she knows a lot about it. So we figured, you know, along with this stuff that we’re doing every week, like the clubs and the briefs and the spotlights on people, we can also have an environmental science beat to discuss sustainability and discuss things about nature that don’t usually find a place in a newspaper. And so I think that was really unique and brought an element of uniqueness to our paper. It was especially important when we were learning about the Weaver Fertilizer Fire. Una did a detailed investigation on the role of regulations at fertilizer fire plants, Wake Forest’s use of the fertilizer, and environmental racism. I think without her environmental science knowledge, it would have been harder to raise awareness about that fertilizer.

CBK: Yeah, I totally agree. Especially in that case, I think she was the perfect person for that. I can’t imagine anybody else doing a better job. And I think her knowledge goes way beyond like what the average news reporter or myself could look at a story and see. So yeah, I think she did a great job. I’d love to continue doing it. And I’m really grateful she came to our stuff and hopefully, it’s encouraging other people to get into sustainability or to continue becoming informed on those types of things.