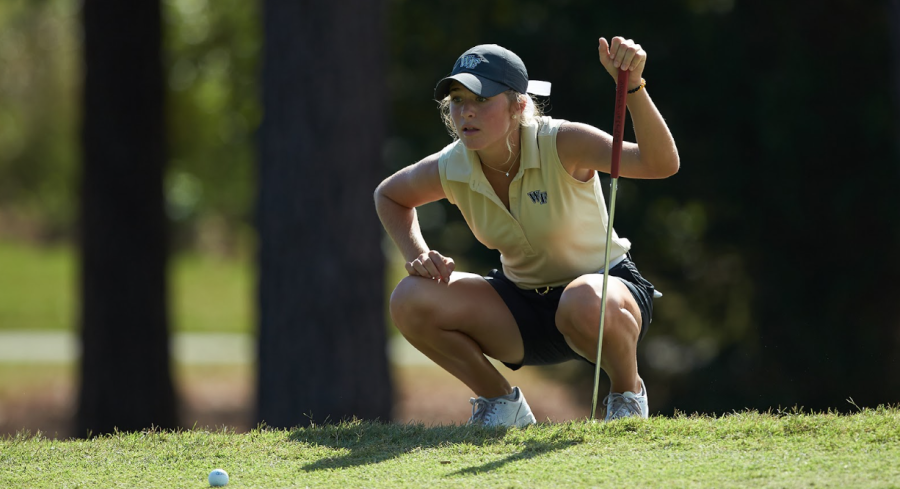 ACC Golfer of the Year Rachel Kuehn admires a shot.

One of the most decorated golfers to come through Winston-Salem in the past many years, the 2021-22 ACC Golfer of the Year sat down with Jack McKenney to talk more about her journey to Wake Forest, the team itself, and her best golfing experiences in what is soon to be a long career.

This Nov. 12, 2021 interview has been transcribed and edited for clarity and AP style. Listen to the full episode here and don’t forget to subscribe to the Old Gold & In Your Ears channel found on all podcasting platforms.

Jack McKenney: Rachel, thank you so much for coming on the show. Really appreciate it. Tell us a little bit about yourself.

Rachel Kuehn: Well, thank you for having me on. So I’m a junior here at Wake Forest. I’m from Asheville, North Carolina. I’ve been playing golf since I was, gosh, about four years old. It runs in my family, so I never really had a choice. But I did ultimately choose to pursue it in college and was lucky enough to get the opportunity to play here at Wake. I’m a Business and Enterprise Management major with a concentration in sports management.

JM: We’ll get into your history with Wake Forest, but did you always have your eye on Wake and how did you get recruited here? How’d the golf recruiting process work out? I know that it’s kind of crazy and wild.

RK: Yeah. So it was funny. When I was super little, obviously grew up a Wake fan, because both my parents went here. And then how the recruiting process for junior golf works, you kind of play some national events and you get some exposure and college coaches will come to watch you. So when I kind of started my process, I actually told my parents, because they both went here and my mom was a golfer here, I told them, “Mom, dad like nothing personal. But I’m like never gonna go to Wake” because it was like y’all school and I want to make my own school and be my own name and all this stuff. And the Wake coaches actually would come to watch me play and all this stuff and I went to some like recruiting camps. Mom kind of convinced me, she’s like, “Wake has spent a lot of time recruiting you watching you play. You owe it to them to go visit.” So I visited during my sophomore year and completely fell in love with it. Loved the coaches, the team, the atmosphere, just Wake Forest as a whole. And ended up committing later that year. So I verbaled it and then signed my senior year. And the rest is history.

JM: That is crazy. I myself am also a double legacy. So I think that’s kind of funny how we both ended up here. But getting into golf. It’s kind of a solo-oriented game, you know what I mean? It’s a team sport. But, you’re kind of on your own the whole time kind of like tennis, if you’re not playing doubles. How does that play in the teamwork aspect and team bonding? What’s the dynamic like?

RK: Yeah, it’s interesting, because college golf, like you said, they’ve taken an individual sport and made it a team sport. And so what’s nice and what’s different about college golf is you do have this support system and these great competitors and great players around you that you can use as a resource. I think that’s one thing that’s nice about having a team. Especially a team, as close as ours, and luckily, as good as we are, is that everyone pushes each other to be better, we have our values that we set as a team. We might have X hours of required practice, but we’re all going to stay after and be there before and work our butts off during practice. Because that’s ultimately how the team gets better. You don’t get better by just doing the minimum work. I think it’s one of those things where no one’s ever — obviously people care about how they play individually, but everyone’s just so much more concerned with how the team plays, which I think is really cool. It’s part of what makes us play as well as do, I think.

JM: You guys killed it this fall, we are really proud of you guys. Awesome season. What do you think went into that? I mean, I know you guys have awesome facilities and you guys work really hard. What were some successes for you guys that helped you propel you to that awesome success?

RK: We have amazing coaches here too, on top of the incredible facility that I would dare I say is the first in the country. And for a small school, what we have is unbelievable. But then, on top of that, you have our coaching staff who are so willing to do anything to help make us better. Between stats, ball striking and putting and chipping, we have every aspect covered. We have resources in the weight room and resources with athletic trainers. We’re so lucky here, it’s such a small school. But then, there are a lot of schools that might have players that individually have seen success. I think what separates us is that we have a pretty deep team and anyone from our lineup can go out and win a golf tournament at any given point.

But on top of that, we all like to see each other succeed, too. So you have teams that might have two or three or four or five really good players, but it’s super cutthroat. They’re never going to have success on a larger scale. You’re so worried about beating your teammates, that you’re not really caring how the team is doing. Whereas I think we, we all want to see each other succeed, even if that means maybe you don’t finish first on the team, or whatever it is, we just want to see the team play well. That’s part of what I think has led to the successful fall that we’ve had.

JM: Yeah, that’s awesome. It’s always great when you guys can care about one another instead of yourself, even though golf is a very kind of individual and somewhat selfish sport. But anyway, so you said you’ve been playing golf since you were four years old. And you play for Wake Forest, so you’ve probably played at some pretty cool golf courses. What would you say is your favorite course you’ve ever played on?

RK: I’ve been lucky enough to play Augusta National, which was incredible. Played the Women’s Amateur tournament there and it was unbelievable. The week before the Masters so it was in perfect shape. It was a little cold when we played, but that was unbelievable. I got to travel to Wales this summer, and play a course up in the north of Wales called Conway Golf Club, which was spectacular. It was right at the base of these mountains and overlooking the sea. It was a links golf course and it was so cool. So those two are up there for sure. Yeah.

JM: That’s great. So to finish it off, I always like to ask a fun question. Where’s your favorite place to eat off campus? We went on campus with our last guy and I think he said Subway. Off campus for me, I love Bagel Station. I don’t know if you’ve been there before.

JM: What about you?

Correction July 22, 2022: An earlier version of this article misspelled Rachel Kuehn’s name in the headline and caption.