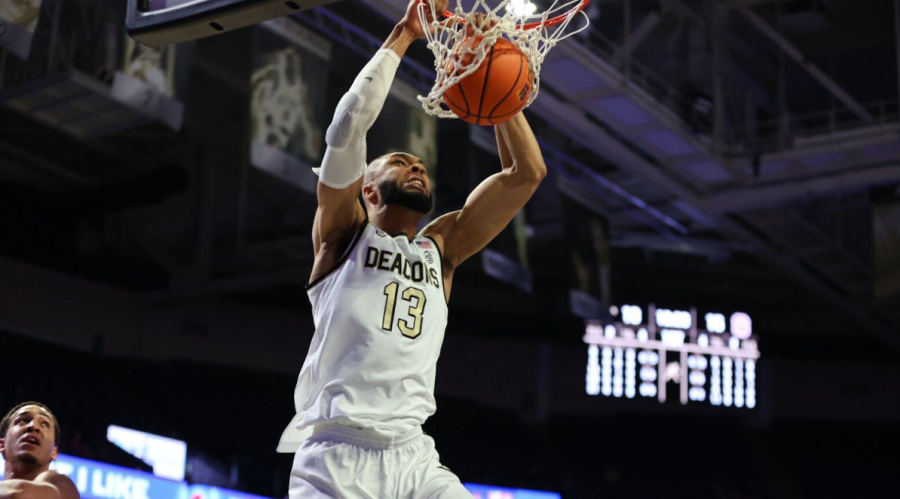 Dallas Walton, graduate forward on the men’s basketball team, sat down with Jake Stuart on our OGB Weekly Sports Podcast. The two Colorado natives spoke about the seven-footer’s path from the Pac-12 to the ACC, his experience at Wake Forest so far, and much more.

This Feb. 4 interview has been transcribed and edited for clarity and AP style. Listen to the full episode here and don’t forget to subscribe to the Old Gold & In Your Ears channel found on all podcasting platforms.

Jake Stuart: We are back on the Wake Forest weekly sports podcast and we are joined today by Dallas Walton, Wake Forest star forward. Thanks for being here Dallas, appreciate you man.

Dallas Walton: I appreciate you having me.

JS: Dallas is also from Arvada, Colorado. He actually went to my mom’s high school and my dad’s college. shout out the CU Buffs. Go Buffaloes. But I wanted to start off by asking you what was the transition like going from Pac-12 basketball to the ACC? What are a couple of differences you noticed?

DW: Well, I mean, each league no matter when you play in it has different players, so obviously the style of play changes from year to year. But I would say the most noticeable part for me, especially down low working as a four or a center, is that the physicality of the bigs. It’s a little bit more finesse and more talent in the ACC, rather than in the Pac-12 where you kind of have just big bodies down there, who know their role and just play it really well.

Yeah, that would be the biggest difference. Also just the talent and prestigious schools as well. I mean, Pac-12 does have some really good schools, but there’s a lot of history here in the ACC.

JS: Colorado in the past has made some pretty good tournament runs, especially this past year. I wanted to ask you what made you kind of turn around and say why Wake Forest?

DW: So actually, I had a lot of connections with the coaching staff here. Because coach Matt Woodley, he’s the assistant coach here, he is from Colorado as well. I knew him and I knew that I would have a familiar face coming to an unknown area. And for my graduate year, my last final year, I wanted to try something different away from home. Because I grew up in Colorado and went to school in Colorado. And so I was like, ‘You know what, I want to see how I would do if I’m away from my home, away from my family, and try something new.’ At least having a familiar face in a strange place was something that I was OK with.

JS: What would you say about Steve Forbes’s coaching style? What makes him different from some of the coaches you’ve had in the past?

He can hold a conversation where sometimes some of my coaches that I’ve had in the past, it’s just X’s and O’s. They’re just thinking basketball all the time. And you know, sometimes I like to talk about stuff other than basketball with my coaches. After a while you do it every day, it kind of wears on you like, let’s just talk about something else.

JS: So one thing I like to tell people about Steve is that he’s a man of the people. I mean, after every win you see him at Putters, he’s talking to people.

JS: You are one of the older guys on the team this year. What inspires you to be a leader on the team?

It’s also making sure that all these guys understand that it’s an everyday type of deal. There really are no days where you can take off because no matter who you’re playing, the margin of error in college basketball is really thin. So if you don’t bring it one day, you can get beat by anybody. And that’s from lower D-I to a top team in the nation. Yeah. I think that’s what I bring a lot of experience and just trying to make sure like I can get everybody on board for what I’m thinking or what I’m feeling

JS: Looking around at like the rest of the ACC this year, it’s not been as strong as the past. But who would you say as a team to watch out for maybe aside from Duke?

DW: I mean, shoot. Even though everybody’s saying [the ACC] is on a down year, it’s only because they had a bad non-conference. Other than that every team still has the same talent as any ACC level team. It’s just because they weren’t able to take care of business in the beginning that everybody thinks that the ACC is on a downward turn. Even though all the talent in the league is the same as all the other Power Five conferences.

So obviously, you have your Duke’s, North Carolina’s and I mean shoot, Miami is making a run right now. And I think that Miami is actually one of those teams that is probably going to make the tournament and they will probably surprise a lot of people if they continue their streak. But I mean, all the ACC teams are very talented and it should be interesting to see what happens toward the end of this month. We’ll see which teams can make a run. But I think yeah, those top three, Duke, Miami, and shoot, us.

JS: Where would you say has been your favorite place to play so far?

DW: We just got back from Syracuse playing in that football arena with all those people. That was incredible. They showed out in a way I’ve never seen before. That was the most people I think I’ve ever played in front of actually. I’m excited to go to Duke Cameron Indoor, another really cool place. Lousiville was cool too, having that stadium in the middle of the city was really cool.

I’m trying to think about some of the places I played at. But this year, yeah, we’ve been to a lot of cool stadiums. I think those are my top three so far. But I feel like I’m forgetting one.

JS: Speaking of that kind of energy you saw this past week, what would you say about that energy against UNC and Duke at home? Could you guys feel it on the court?

DW: Oh, yeah. Oh, yeah. I mean, our student section showed out huge. I love the guys that get there early and they’re up front, they’re just chirping the other team, to showing love to us in the warm-ups and everything and during the game. It’s an experience that I always wanted. I knew that Wake Forest was capable of packing the Joel. And seeing it in person, especially against those big teams, it was something I’ll never forget. It was talked about through basketball history with Tim Duncan and Chris Paul and all those other legends that have come here and teams that have been really successful. So being able to pack the Joel and just being able to do it myself was awesome.

JS: I wanted to ask you one more question, too. This one is more personal for me. But how different would you say — the people tell me, they’ll probably tell you too, you’re from Colorado, you’re used to the cold — how much colder would you say it is here compared to Colorado? Because I’m thinking it’s pretty cold.

DW: This year, it is colder in North Carolina than in Colorado. Everybody loves to say ‘Oh, Colorado is cold how do you live up there?’ And I’m like, no, it’s actually pretty warm there. It snows sometimes, but if you’re in the foothills area, it snows and it melts. Here it’s icy, it’s cold, it’s like that icy cold you feel in your bones. Up there it’s a dry cold so it’s cold but I would wear this. I’m in a sweater and some sweatpants and I could wear this all year in Colorado. Whereas here I need a puffy jacket. That ice-cold it’s brutal. So yeah, I would say it’s colder here than Colorado.

JS: Couldn’t agree more. Oh yeah. Well, hey, best of luck so far for the rest of the year. It’s been good so far. Hope you guys can keep it up and it’s been great to watch.