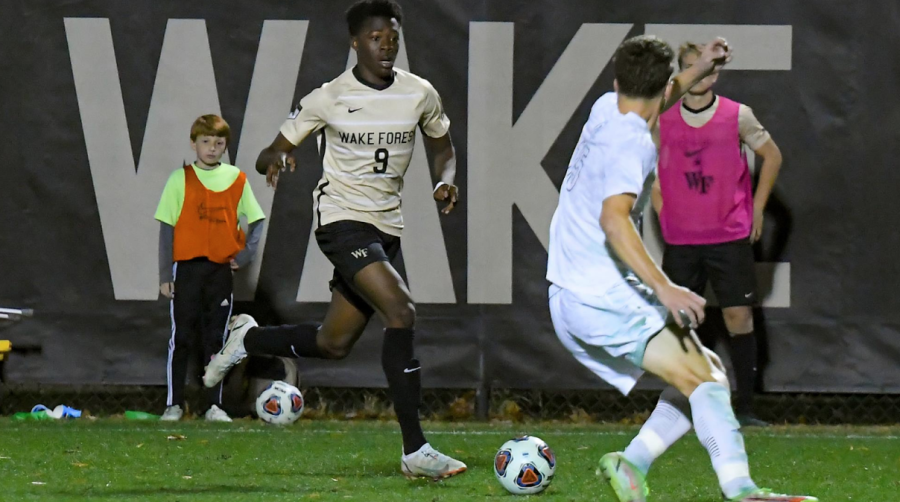 Roald Mitchell handles the ball during a game.

Roald Mitchell, freshman midfielder and former New York Red Bulls Academy member, sat down with Jack McKenney and Jake Stuart to talk about his transition from junior-level soccer to the ACC. The three hit on the ups and downs of the previous soccer season as well as talk about the team for next season.

This May 3, 2022 interview has been transcribed and edited for clarity and AP style. Listen to the full episode here and don’t forget to subscribe to the Old Gold & In Your Ears channel found on all podcasting platforms.

Jake Stuart: We have the number one recruiting class in the country and you were a part of it. Can you tell us about what went into the whole recruiting class and what it was like to be recruited by a school like Wake Forest?

Roald Mitchell: Knowing that they had a really good soccer team, I actually had done a lot of research on Wake Forest before so I really wanted to go there from the start. Knowing I wanted to be on that team, I knew I had to work hard for it. It doesn’t come that easy. Either it’d be I stay after practices and stuff, you know, work hard, see what teammates say. So to be recruited by one of the coaches, I was so glad to be in that situation.

Jack McKenney: What was so appealing about Wake Forest? Why did you have your eyes set on it?

RM: It wasn’t just soccer, I think academically as well. This school is really good academically, so I definitely see myself in the future getting a degree here. That’s the main goal.

JM: Before coming here, you played for the New York Red Bulls, a very competitive team. What lessons did you learn? How did that competition prepare you for this level?

RM: I honestly don’t see a difference in competition between Red Bulls and the ACC. Right now, I think the league is really competitive and I’m still getting the same type of competition.

RM: Oh, yeah, it’s just something to get used to. As a freshman member, in the fall season, I didn’t get much playing time. So you know, that was something I had to adjust to and so it’s not working for you and stuff. You have to work through it so I’d just fight through it.

RM: Honestly, I’d just sleep on it knowing that I’m not doing as well. I have a lot of schoolwork on my mind and other stuff. So I have a lot of stuff that factors into me having cold streaks.

JS: What was the most memorable goal you scored this year? I know you scored that one in the NCAA tournament to win it there. Was that the best one or was it a different one?

RM: I would say Loyola-Maryland but I think I’m gonna go FIU [in the tournament]. That was an insane goal because those fans were annoying.

JS: Can you tell us a little bit about that London trip. You were able to play against some great competition, and be around those teams out there. What was that like? And what all did you guys do?

RM: Being in England was definitely an experience playing against those other academies. I mean, something that we had to adjust to because it was definitely a higher level. But I think we were able to fight through that. We had a couple of players step up, one of them being Ryan Fessler, he scored a couple of goals and was insane the whole tournament. So I think having to adjust to their playing style and their fields is something that we did really well.

JM: Give us a little bit of a preview of the team next year. Who are some leaders that we can expect to step up for this team and how’s the recruiting looking?

RM: The recruiting is looking pretty good and I know a couple of players coming in that I’ve played with. One of them his name is [inaudible]. He’s really good, special, good on the ball. I think a leader to look up to in the future is definitely Garrison Tubbs, centerback. He has really good leadership traits and I can see him carrying our team next year.

JM: Talk a little bit about your fellow freshmen on the team. Who were you really close with? Who did you develop a bond with? Who do you see going forward being some of your best friends?

RM: Freshmen, so we have Leo Guarino. He is one of my best friends so far. He’s like the first one I bonded with. I played with him when I was younger, on the NYCFC circuit, and we had a little rivalry. We have Baba Niang. He’s still in Senegal, but I think he came back though. He wanted to get his visa. He’s one of my good friends too. He also played with Red Bull for a couple. Then we have Cooper Flax, another NYCFC guy, a really good, special kid. I’d say I’m starting to build a relationship with him as well, even though he just came in.

Then we have Samuel Jones really good centerback. Very strong and [inaudible] off the ball a couple of times. Alec Kennison, he’s my roommate right now. I think he’s a really good friend of mine. He came from Ohio. He’s like a really chill kid. Coming from San Diego and moving to Ohio and living all around the world, I see myself having a strong relationship with a couple of the sophomores on the team. Christian Escribano…

JM: Yeah, he was on the podcast.

RM: We clicked a lot, and I hang out with him a lot. And Chase Oliver. I met him when I was like five. We were best friends playing on the same team, so us being here together right now is pretty cool.

RM: Oh, yeah, definitely. I think when the fans — no matter who it is, away fans or the home fans — but whoever’s talking definitely gives us the energy to keep playing, for sure. Because when there are no fans, there’s no energy for us.

JS: We’ve got those rowdy fans too, right behind the goal. They bring it.

JM: Yeah, and then the goals. Oh my god, it’s just electrifying when we score. Looking at the rest of the ACC next year, who are some teams that you might be kind of scared of and you know, might be kind of challenging you guys next year?

RM: I’d say probably Georgetown, they’re definitely really good coming from a different conference as well. We played them in the spring and beat them, but I think they were one of our strongest competitions throughout the spring. Then we have Pitt, which I think we could have beat them by a couple more goals. And then I know Clemson is really good and we have UVA. Almost every team in the ACC is really good, so I feel like every team in the ACC is gonna give us a challenge. But there’s so much to prepare for.

JS: You also come from a family with a lot of athletes, right. I think your dad played at Villanova? And then your brother played as well. What was that like to continue that trend?

JM: I always ask this last question to the athlete. There’s been a diversity of answers and I’m interested to hear what you have to say. Where’s your favorite food place to eat off-campus? Jake, I forgot yours honestly.

JS: Hmm, either Camel City or Cin Cin. I think that’s a tie.

RM: I was gonna say Cugino, but I’m not gonna be that generic. I’m going to say Cava.

JS: We haven’t gotten that one.

JM: Could have said Chipotle. [Cava], that’s the creative answer.

JS: How about on campus?

RM: On-campus? It’s gotta be Chick-fil-A. What else could it be?