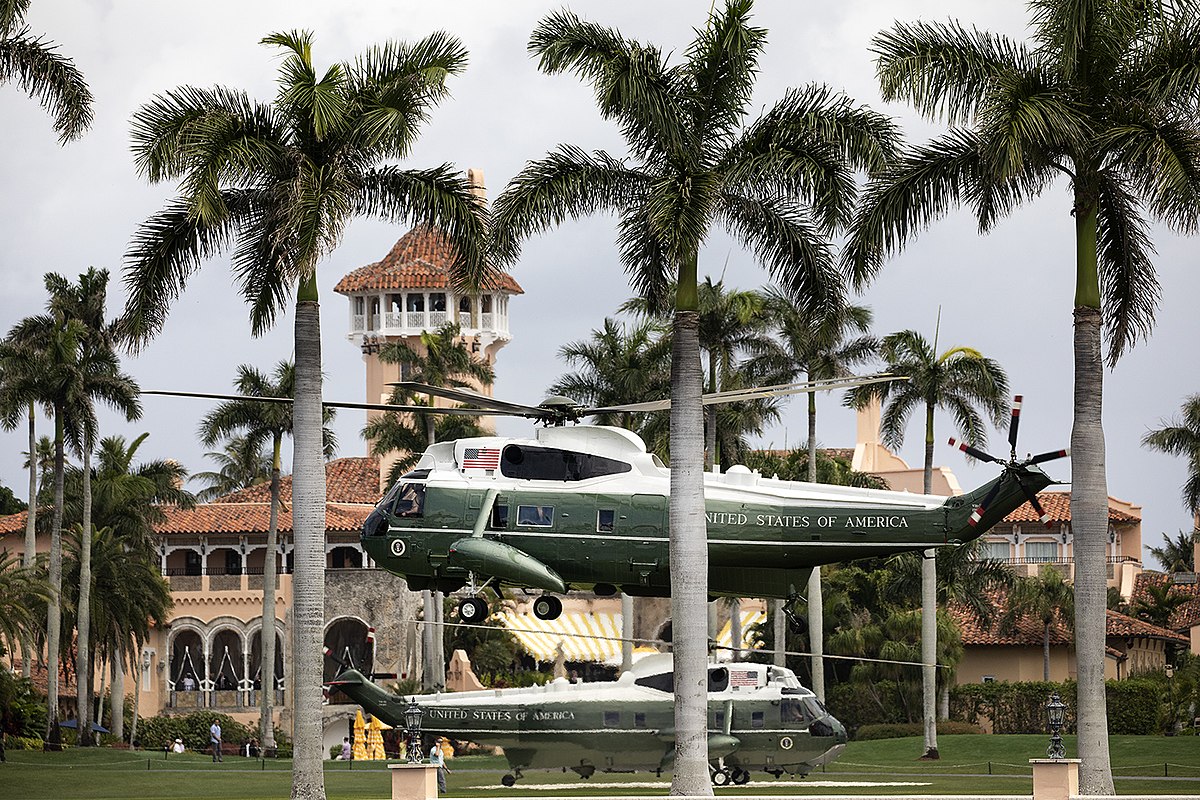 Marine One descends at Mar-a-Lago, the Florida residence of former President Donald Trump.

OGB writers offer their thoughts on the raid and its aftermath

The following articles reflect the time at which they were written and may not reflect all updates to the ongoing situation surrounding the FBI’s raid at Mar-a-Lago.

In the lead-up to the 2016 presidential election, then-candidate Donald Trump rallied supporters with “Hillary for Prison” and “lock her up” chants that echoed throughout a sea of red MAGA caps. Fueling crowds with cries over Clinton’s emails, Trump ran on a platform centered around the mishandling of sensitive information. Yet, on Tuesday, Aug. 30, the former president was found to be in the possession of hundreds of highly classified documents pertaining to U.S. intelligence at his Florida residence.

An FBI raid of Trump’s Mar-a-Lago estate revealed that the documents — which were stored in a room accessed by an unknown group of individuals — contained information regarding foreign assets and other pivotal areas of U.S. involvement. The files, which divulge some of the most highly classified material kept by the federal government, were merely one door away from the bustling golf resort and hotel. The Mar-a-Lago Club, which evidently betrays the criteria for the storage of classified information, represents an explicitly unauthorized location for the files in question.

This recent development in the ongoing investigation surrounding Trump epitomizes the blatant incompetency that he has exhibited over the course of his presidency and in the following years. From inciting an insurrection that jeopardized the nation’s democracy to harboring classified documents in a private residence, the lengths to which Trump has stretched the foundations of the government have far surpassed any imaginable boundaries. Yet, as the Department of Justice continues to delve into the shadows of Trump’s past, the list of egregious actions perpetrated by him and his campaign is almost certain to grow.

During the time that these documents were stored in Mar-a-Lago, countless Republican officials and political candidates passed through the estate without documented security proceedings. Mar-a-Lago, described as a “counterintelligence nightmare” by the former head of U.S. counterintelligence Joel Brenner, has been criticized for serving as a gathering site for individuals under scrutiny, and oftentimes, investigation.

Throughout his presidency, Trump garnered criticism for frequenting Mar-a-Lago while he was thought to be at the White House or conducting business in Washington, D.C. Thus, the discovery of these documents symbolizes the degree of neglect that he showed toward the highest position of power in the United States.

The FBI’s discovery underscores the importance of electing an individual with knowledge of how the government operates and who is capable and deserving of leading the United States. At its most basic level, allowing someone access to classified information without any understanding of the implications of such material is dangerous, and poses a severe threat to the country.

Furthermore, Trump’s unwillingness to cooperate with federal investigators suggests a guilt that transcends any indiscretion. Though officials have released information regarding these files to the public, there has not yet been a sigh of relief signaling that the tribulations have ceased.

As the 2022 midterm elections rapidly approach, the question of presidential candidates for the 2024 general election is no longer a distant thought. Trump, who has remained a consistent point of intense controversy, has not denied the possibility that he will run for a second term in the next two years.

Trump has shown time and time again that he is not above meddling with the tenets of this country — the same tenets that he continues to utilize as a means to exploit his supporters.

The warning bells have been ringing since before 2016, when Trump entered the political stage in an abrasive and insulting manner. The findings from Mar-a-Lago only exacerbate the extent to which Trump has made a mockery of America, and how he has ultimately placed the nation’s security on the back burner as he seeks to evade the law and profit off of his political standing.

The summer of post-truth politics

Talk of political polarization has consumed headlines in recent months. The most notable event of late has, undoubtedly, been the reaction to the FBI’s seizure of allegedly classified government documents at Mar-a-Lago (a club and resort owned by former president Donald Trump). Within hours of the search, which was authorized by Attorney General Merrick Garland, Republican outrage was palpable. Tucker Carlson, an anchor at Fox News and host of “Tucker Carlson Tonight”, claimed that the raid gave clear indication that “these were acts of aggression and hostility aimed at Americans … no American president has ever declared war on their own population.” Ben Shapiro, host at “The Daily Wire”, predicted that “if this raid turns out to be nothing … there will be hell to pay … things will get really, really ugly.”

These sentiments are shared among a sizable majority of Republicans. According to a recent poll by the Wall Street Journal, “41 percent [of Americans] said they viewed the FBI search as part of an ‘endless witch hunt’ against the former president” while 64% of Republicans said that the raid made them more likely vote in the 2022 midterm elections. Whether a surge in support for the former president will materialize remains to be seen, but the reaction from many Republicans is yet another indication that the American people are losing faith in our governing institutions.

While President Joe Biden has largely abstained from commenting on the raid, he recently traveled to Independence Hall in Philadelphia, PA to deliver a fiery speech about the threat posed by ‘MAGA’ Republicans. The President claimed that “too much of what’s happening in our country today is not normal. Donald Trump and the MAGA Republicans represent an extremism that threatens the very foundations of our Republic.” Biden would go on to discuss, without much detail, Republican support for election-deniers, their rejection of bodily autonomy, privacy and LGBTQ+ rights; and their willingness to embrace political violence and authoritarian leaders.

What Biden seems to have forgotten, though, is that, in politics, image is everything. Against the backdrop of crimson red lighting and United States Marines, the speech was constructed as if it were a campaign speech — it was far from a direct or factual examination of the philosophies supporting ‘MAGA’ Republicans. The danger in delivering such a speech is that it can easily be perceived as an attack, if not a threat, to Biden’s political opposition (regardless of whether they are so-called ‘MAGA’ Republicans). Indeed, the talking point widely shared among Republican commentators the following day was that “this was the most dangerous Presidential speech in modern history” and that the president “had declared half the country as the enemy.”

The natural question, then, is whether these and other statements made on the left and right are merely rhetorical or symptomatic of a larger decay in American political discourse. I am strongly inclined to believe the latter. It has become increasingly clear that faith in the American government is dwindling. The Pew Research Center, which has tracked American faith in the government since 1958, found that from April to May only nine percent of those who identify as conservatives trusted the federal government. In that same period, support among liberals was higher (averaging out at about 32%) but can be expected to oscillate if the Republicans were to regain power in either the executive or legislative branch. Concerning still is that faith in government has never surpassed 37% among either party since 2008.

More to the point, though, a loss of faith in the federal government has corresponded with a greater willingness to embrace subnational political identities (chiefly, party affiliations). Political discourse has moved away from “macro spaces” (the nation) and into micro spaces (the party). Parties have created insular spaces that cement any ideas that run contrary to what we might consider to be a more nuanced reality. The events of this summer highlight how the embrace of ‘post-truth’ politics tends to undermine the durability of the social contract — the idea that legitimate governance relies on the consent of the governed. “Truth,” in an open and pluralistic society, invites and makes possible the expression of different viewpoints. Post-truth politics detaches political discourse from this factual infrastructure. Possibilities for open debate and careful scrutiny of policies are denied. In its stead, post-truth politics seeks to normalize the outrageous, the absurd, and the obscene. By normalizing ad hominem politics, parties can claim a monopoly on political discourse. Those who oppose or otherwise question the beliefs of a party are deemed malicious and immoral. Post-truth politics breaks apart the common bonds of a nation by fueling mistrust and prejudice. The social contract cannot last long under these conditions.

Gustave Le Bon, author of “The Crowd”, predicted that political parties would capture the worst impulses of the crowd and convert them into a political force. Le Bon wrote in 1895 that as “our ancient beliefs are tottering and disappearing, while the old pillars of society are giving way one by one, the power of the crowd is the only force that nothing menaces, and of which the prestige is continually on the increase.”

He continues: “[the] psychological law of the mental unity of crowds” is that crowds of like-minded people are more likely to disregard careful examination of their beliefs” and that “the masses have never thirsted after truth. Parties — like crowds — turn away from evidence that is not to their taste, “preferring to deify error, if error [seduces] them.” As Le Bon put it, “whoever can supply them with illusions is easily their master. Whoever attempts to destroy their illusions is always their victim.”

Le Bon’s prediction was correct. Post-truth politics — as embraced by both political parties — pose a serious threat to liberal, democratic governance. Liberal societies must, by necessity, operate pluralistically and with due regard for their factual infrastructure. The health of political discourse will decline in proportion to our disregard for these basic norms. We must refuse the embrace of post-truth political behaviors – they are strongly anti-pluralistic. This sort of behavior dramatically flattens the political landscape in its presentation of political reality. Classical liberals and free speech advocates seem to believe that the antidote to anti-pluralistic behavior can be found in the expansion of spaces for free expression. Yet, the existence of a free space does not guarantee the embrace of pluralism — much less a surrender of post-truth political identities. The antidote to post-truth politics is not purely political – it is also sociological. In other words, we should not presuppose that the political nature of man is rational. As we have seen this summer, post-truth politics undermines this assumption. If we ignore the sociological behavior of parties, post-truth politics will subsume the fabric of the Republic and ordinary Americans will reap the consequences.