Davien Williamson (no. 4 in white) takes a shot in a home win against Duke.

The Demon Deacons recorded a Q1 loss and a Q1 win 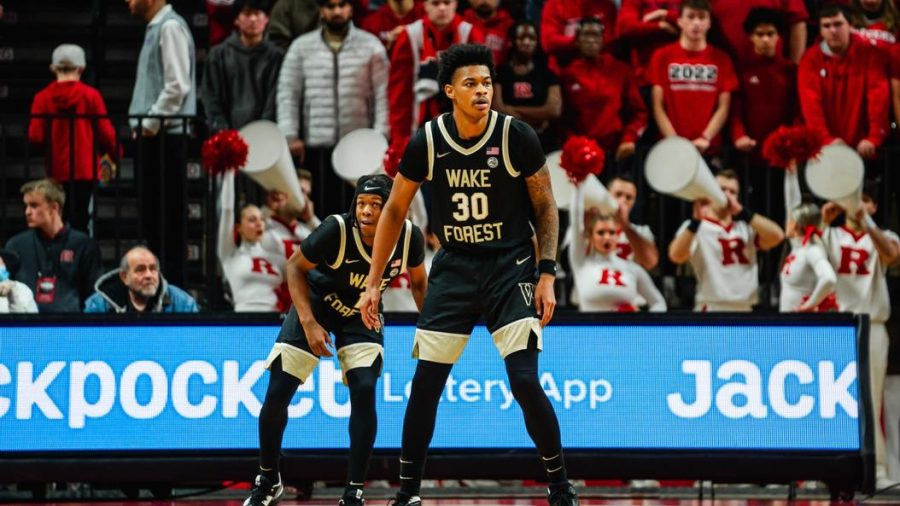 Damari Monsanto (no. 30 in black) played one of the best games of his career in the loss against Rutgers.

After a thrilling win at home against the Appalachian State Mountaineers, Coach Steve Forbes and the Wake Forest Demon Deacons took on the final game of their non-conference schedule and their toughest challenge yet — the Rutgers Scarlet Knights. After getting outmatched by the Rutgers defense, the Demon Deacons fell 81-57 and dropped their overall record to 8-4.

“They physically overwhelmed us, especially at the beginning of the first and second half,” Forbes said after the game. “I thought that was when the game got out of hand for us.”

Rutgers is a top-five defensive team led by head coach Steve Pikiell and forward Clifford Omoruyi, who was featured in the Preseason All-Big Ten Team. The Scarlet Knights were looking to bounce back from a devastating two-point loss to in-state rival Seton Hall, a game in which they only scored 43 points overall.

The Scarlet Knights came into the season as a dark horse in the Big Ten. After a disappointing first-four loss to Notre Dame in the NCAA Tournament last season, Pikiell lost the likes of current Toronto Raptor Ron Harper Jr. and double-digit scorer Geo Baker. However, they returned a large amount of defensive production, including 2021-22 Big Ten Defensive Player of the Year and a key rim protector in Caleb McConnell.

One of the largest storylines heading into the game was the health of Wake Forest’s key guard, Tyree Appleby. Appleby, the leading scorer for the Demon Deacons throughout this season, came down with an ankle injury in the late stages of the Appalachian State game. Appleby would not only go through warmups but would do so without an ankle brace. He was soon announced as a starter for the game along with fellow guard Daivien Williamson, wing Cameron Hildreth, forward Andrew Carr and big man Matthew Marsh.

The odds were stacked against the Demon Deacons from the jump. A raucous, sold-out Jersey Mike’s Arena (affectionately known as the RAC by the Rutgers faithful) was filled to the brim with locals and students, most of whom were not yet on winter break. A small contingent of devoted Wake Forest fans stood behind the team’s bench and dotted the arena with gold and black — including former ACC Player of the Year and current Brooklyn Net Alondes Williams.

The Demon Deacon faithful would watch their team get off to a rough start, going down 13-4 within the first four minutes. Within those first four minutes of play, the Deacons turned the ball over five times, as the Scarlet Knights’ 2-2-1 press defense proved to overwhelm the Demon Deacons’ offense. Two turnovers from Williamson and Appleby allowed the Scarlet Knights to get off to a hot start.

This would not dishearten the Demon Deacons entirely, though. Consecutive three-pointers by Appleby and Damari Monsanto after the first media timeout would highlight a run that would bring the lead down to three — the closest they would get for the rest of the game.

The Scarlet Knights’ McConnell and Paul Mulcahy would take over the game for them on the defensive end from that point forward. Behind each of their two first-half steals, the Scarlet Knights would expand the lead to 16 points as time dwindled in the first half. Three-pointers from Appleby, Monsanto and Carr lowered the differential down to 10 points going into the halftime break.

After halftime, Pikiell’s team came out hot — especially his new transfer guard, Cam Spencer. Spencer would hit two three-pointers — each assisted by Mulcahy — as the Scarlet Knights increased their lead to 19.

After three-pointers from Williamson and Monsanto were able to whittle the lead down to thirteen, tragedy stuck in the way of foul calls for the Demon Deacons. Within a span of 23 seconds, Appleby gained three straight fouls — the last of which was the star’s fourth.

From there, the Demon Deacons were never able to reduce the deficit to single digits for the rest of the game, despite a barrage of jumpers from Monsanto, who would have a game-high with 22 points.

“I was really proud of the way [Monsanto] played,” Forbes said postgame. “He didn’t play against App State, but he came in and did what he could do. He’s a great player, and I think he did a great job of playing within himself today.”

The final score would be the Scarlet Knights’ largest lead of the game, a 24-point win, 81-57. Their offense would score at the highest rate percentage-wise in over three years — shooting 58.5 percent, best since shooting 59.3 percent versus Niagara on Nov. 10, 2019.

“We also had more turnovers than made field goals, and I don’t think there’s a way you can win that way,” Forbes said, reflecting on the 22-turnover performance. He added that the Demon Deacons shot 20-50 from the field.

Coach Forbes and the Demon Deacons took this loss ahead of one of their hardest slates of games this season — including two Final Four teams from last year in Duke at home and UNC in Chapel Hill, sandwiched around a New Year’s Eve contest against last year’s ACC champions, Virginia Tech.

“I think our non-conference schedule helped us,” Forbes said, reflecting on how prepared his team is to take on the ACC slate of games. “We played a lot of different kinds of teams, we had a tough loss to Loyola Marymount, and we had a great win at Wisconsin. You put those things in the bank now, and you move forward.” 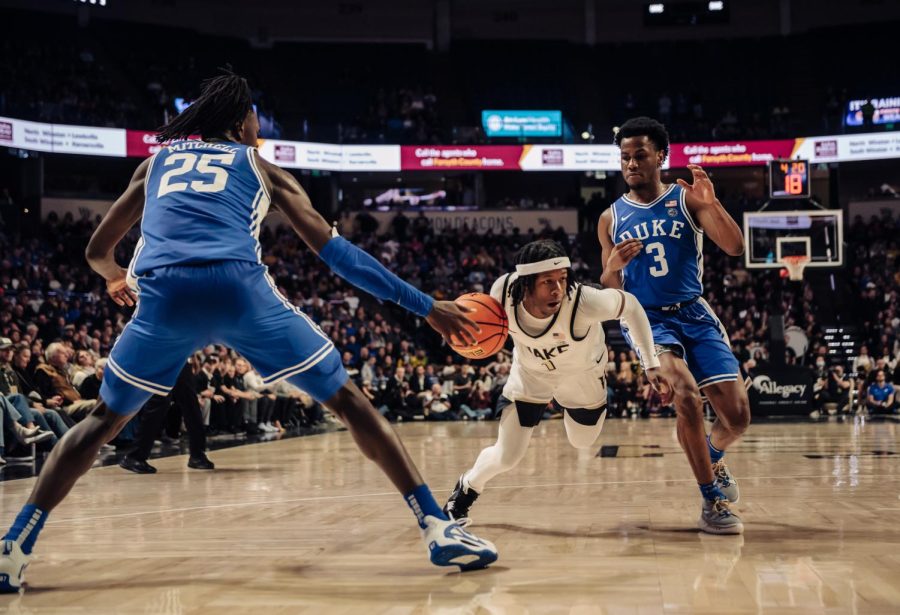 Home for the holidays, Wake Forest triumphs over Duke

Christmas came early to Lawrence Joel Memorial Coliseum, filled nearly to capacity on Tuesday night. Following a blowout loss on the road against Rutgers, the Demon Deacons bounced back in their first home ACC contest of the year with a confidence-inspiring 81-70 victory over Duke.

Wake Forest dominated with all five starters recording double figures. The matchup marked the 258th meeting between the two teams — a rivalry dating back to 1905. Wake Forest fans can rejoice knowing that Duke head coach Jon Scheyer’s first visit to Deactown resulted in an unexpected beatdown. It is also the first time Wake Forest has beaten Duke since Feb. 25, 2020.

The Blue Devils only led the contest early in the first half for 19 seconds, unable to regain footing for the rest of the game. Standout performances from graduate Tyree Appleby, sophomore Cameron Hildreth and junior Damari Monsanto paved the way for what would be a decisive win for the Demon Deacons.

Appleby led the Demon Deacons in scoring, netting 18 points — this contest marks the sixth time this season that he has led the team in scoring. Appleby was effective at the line on Tuesday night, missing just one of his 14 free-throw attempts. He is currently ranked third in the ACC for average points per game with 18.

Hildreth was a force to be reckoned with, playing aggressively in the paint on each offensive drive. He led the Demon Deacons with nine recorded rebounds in addition to scoring 16 points.

Monsanto had an impressive performance, racking up 13 points for the Demon Deacons along with five rebounds.

From the field, Wake Forest shot 49.1% compared to the 39.1% average to which Duke had held their 12 previous opponents. The Blue Devils themselves recorded 44.1%.

Free throws proved incredibly important to the final scoreline. Wake Forest netted 22 of their 26 attempts compared to Duke only making 10 of their 24.

When asked about the defeat, Scheyer credited the Demon Deacons.

“They outplayed us,” Scheyer said. “They were the hungrier team [with] a sense of urgency coming off of their game on Saturday, you could really tell. And for us, we didn’t really have that.”

Scheyer was also asked about the absence of two outstanding freshmen, Dereck Lively II and Dariq Whitehead, who had fallen ill with a non-COVID-related illness.

“We’ve been healthy, it’s [just] we got sick,” Scheyer said. “It’s how it goes…other teams go through it, it’s not ideal of course…you look at that time when you had exams but also leading up to this game, practice time, we didn’t have our group together.”

Despite this, it must be said that the absence of two players did not define their loss. The remaining Duke starters played without intensity and quickly fell behind an aggressive Wake Forest team.

Wake Forest brought a different intensity as compared to their more recent games.

“Early on in the season, we had been playing to survive,” Wake Forest head coach Steve Forbes said in a post-game interview. “You can’t hope the clock runs out man, you gotta play.”

Forbes of course was referring to the close contests that Wake Forest has already run into this season. Five of the past 13 games have been decided by five points or less. The resounding 11-point victory against Duke was a blueprint of the way Forbes would like to see the rest of the season.

“I’m really proud of our team,” Forbes said. “In the second half, we took a punch to the canvas there in about nine minutes, but we came right back. We didn’t fold, and we’ve had some moments where we’ve teetered and we didn’t finish, and tonight was a great example of finishing.”

The Demon Deacons resume ACC play at home on New Year’s Eve at noon against current No. 21 Virginia Tech on the ACC network. Virginia Tech lost to Boston College on Dec. 21.